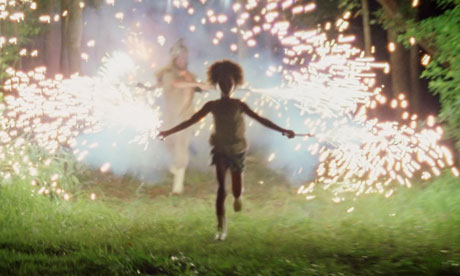 Sundance is wrapping up once again this year and as with every year, quite a few films are generating quite the buzz. Among them is The House I Live In, The Law in These Parts and Violeta Went to Heaven who all earned Jury Prizes. The Sundance awards (while I rarely agree with the choices) are always interesting to follow each year, since the winners are sometimes entirely unexpected. This year there’s no surprise that the most talked about film – Benh Zeitlin’s Beasts of the Southern Wild, took home the top prize.

Here is the full list of winners from the press release, including the five Audience Award winners.

The Grand Jury Prize: Dramatic was presented to Beasts of the Southern Wild, directed by Benh Zeitlin — Waters gonna rise up, wild animals gonna rerun from the grave, and everything south of the levee is goin’ under, in this tale of a six year old named Hushpuppy, who lives with her dad at the edge of the world.

The Grand Jury Prize: Documentary was presented to The House I Live In, directed by Eugene Jarecki — For over 40 years, the War on Drugs has accounted for 45 million arrests, made America the world’s largest jailer and damaged poor communities at home and abroad. Yet, drugs are cheaper, purer and more available today than ever. Where did we go wrong and what is the path toward healing?

The World Cinema Jury Prize: Dramatic was presented to Violeta Went to Heaven (from Chile, Argentina, Brazil, Spain), directed by Andrés Wood — A portrait of famed Chilean singer and folklorist Violeta Parra filled with her musical work, her memories, her loves and her hopes.

The World Cinema Jury Prize: Documentary was presented to The Law in These Parts (from Israel), directed by Ra’anan Alexandrowicz — Israel’s 43-year military legal system in the Occupied Palestinian Territories unfolds through provocative interviews with the system’s architects and historical footage showing the enactment of these laws upon the Palestinian population.

The US Directing Award: Dramatic was presented to Middle Of Nowhere, written and directed by Ava DuVernay — When her husband is incarcerated, an African-American woman struggles to maintain her marriage and her identity.

The US Directing Award: Documentary was presented to The Queen of Versailles, directed Lauren Greenfield — Jackie and David were triumphantly constructing the biggest house in America – a sprawling, 90,000-square-foot palace inspired by Versailles – when their timeshare empire falters due to the economic crisis. Their story reveals the innate virtues and flaws of the American Dream.

The World Cinema Directing Award: Dramatic was presented to Teddy Bear (from Denmark), directed by Mads Matthiesen — Dennis, a painfully shy 38-year-old bodybuilder who lives with his mother, sets off to Thailand in search of love.

The World Cinema Directing Award: Documentary was presented to 5 Broken Cameras (from Palestine, Israel, France), co-directed by Emad Burnat, Guy Davidi — A Palestinian journalist chronicles his village’s resistance to a separation barrier being erected on their land and in the process captures his young son’s lens on the world.

The Waldo Salt Screenwriting Award was presented to Safety Not Guaranteed, directed by Colin Trevorrow and written by Derek Connolly.

The World Cinema Screenwriting Award was presented to Young & Wild, co-written by Marialy Rivas, Camila Gutiérrez, Pedro Peirano, Sebastián Sepúlveda — 17-year-old Daniela, raised in the bosom of a strict Evangelical family and recently unmasked as a fornicator by her shocked parents, struggles to find her own path to spiritual harmony.

The US Documentary Editing Award was presented to Detropia, co-directed by Heidi Ewing, Rachel Grady — The woes of Detroit are emblematic of the collapse of the US manufacturing base. This is the dramatic story of a city and its people who refuse to leave the building, even as the flames are rising.

The World Cinema Documentary Editing Award was presented to Indie Game: The Movie, co-directed by Lisanne Pajot, James Swirsky — Follow the dramatic journeys of indie game developers as they create games and release those works, and themselves, to the world.

The Excellence in Cinematography Award: US Dramatic was presented to Beasts of the Southern Wild, directed by Benh Zeitlin, featuring cinematography by Ben Richardson.

A US Documentary Special Jury Prize for an Agent of Change was presented to Love Free or Die, directed by Macky Alston — One man whose two defining passions are in conflict: an openly gay bishop refuses to leave the Church or the man he loves.

A US Documentary Special Jury Prize for Spirit of Defiance was presented to Ai Weiwei: Never Sorry, directed by Alison Klayman — Renowned Chinese artist and activist Ai Weiwei has garnered international attention as much for his ambitious artwork as his political provocations and increasingly public clashes with the Chinese government.

A US Dramatic Special Jury Prize for Excellence in Independent Film Producing was presented to Andrea Sperling and Jonathan Schwartz for Smashed and Nobody Walks.

A World Cinema Dramatic Special Jury Prize for Artistic Vision was presented to Can (from Turkey), written and directed by Rasit Celikezer — A young married couple live happily in Istanbul, but their decision to illegally procure a child threatens their future together.

The Audience Award: Dramatic was presented to The Surrogate, written and directed by Ben Lewin, about: Mark O’Brien, a 36-year-old poet and journalist in an iron lung, decides he no longer wishes to be a virgin. With the help of his therapist and the guidance of his priest, he contacts a professional sex surrogate to take him on a journey to manhood.

The Audience Award: Documentary was presented to The Invisible War, directed by Kirby Dick, about: an investigative and powerfully emotional examination of the epidemic of rape of soldiers within the US military, the institutions that cover up its existence and the profound personal and social consequences that arise from it.

The World Cinema Audience Award: Dramatic was presented to Valley of Saints, written and directed by Musa Syeed, about: Gulzar plans to run away from the war and poverty surrounding his village in Kashmir with his best friend, but a beautiful young woman researching the dying lake leads him to contemplate a different future.

The World Cinema Audience Award: Documentary was presented to Searching for Sugar Man, directed by Malik Bendjelloul, about: Rodriguez was the greatest ‘70s US rock icon who never was. Hailed as the greatest recording artist of his generation he disappeared into oblivion – rising again from the ashes in a completely different context many miles away.

The Best of NEXT!: Audience Award was presented to Sleepwalk With Me, co-written and directed by Mike Birbiglia, about: Reluctant to confront his fears of love, honesty, and growing up, a budding standup comedian has both a hilarious and intense struggle with sleepwalking.