On Saturday, the publishers and creators of BOOM! Studios assembled for a panel in which they discussed BOOM!’s founding and some fun stories from its early days as well as its vision going into its ten year anniversary. There were a few announcements for some potentially groundbreaking projects from creators you may recognize. The panelists were BOOM! founder/CEO Ross Richie, publisher Filip Sablik, editor-in-chief Matt Gagnon, and writers Mark Waid (Irredeemable), Marguerite Bennett (Sleepy Hollow), and James Tynion IV (The Woods). Frank Cho (Liberty Meadows) made a surprise appearance, and other creators showed up via pre-recorded video.

Ross Richie opened up the panel by talking about how he founded BOOM! in his own bedroom with prompting from comics veteran Keith Giffen (Justice League International, Annihilation) based on the principle of partnership between a company and its creators. Publisher Filip Sablik said that over the past year, BOOM! has expanded from 26 to 35 titles and that half of its employees are female showing its commitment to organic diversity. BOOM! also engages heavily with fans through social media, conventions (attended 19 in 2014), and the web-series Buzz on BOOM!. After this introduction, Mark Waid told a humorous story about how and why he hired Matt Gagnon when he was editor-in-chief. Before he worked for BOOM!, Gagnon was in charge of the event planning at Meltdown Comics in La. To celebrate the final issue of Brian K. Vaughan’s Y: The Last Man, Gagnon decided to throw a huge “Y: The Last Party” complete with a red carpet and a live monkey to roleplay as Yorick’s monkey Ampersand. Showing some resourcefulness, he bypassed the Hollywood monkeys and their “agents” and hired an organ grinder’s monkey off the street. Fortunately, there were no accidents, and Richie recommended Gagnon to Waid for an editorial job because of this and not his comics retail experience.

This story was followed by a few announcements. Earlier in the summer, J.G. Jones (Final Crisis, Wanted), who has collaborated with some big comics names (Grant Morrison, Mark Millar, Brian Azzarello), said he was going to be co-writing and drawing a series for BOOM! with a “dream” collaborator. This collaborator was panelist Mark Waid. Waid said this comic has been Jones’ dream project for several years and will not be a superhero story, like most of his usual work. It will be about two boys living in Mississippi in 1927 and will deal with racial issues. The miniseries will feature fully painted watercolor art from Jones and is set to come out in mid-2015. Richie and Sablik cited this book as an example of BOOM!’s non-traditional approach to comics, which includes things like having all-ages comics even in the days before Adventure Time was a best-seller and working with creators, like Alyssa Milano and Claudio of Coheed and Cambria, who are more well known for their work in other mediums, like acting and music. 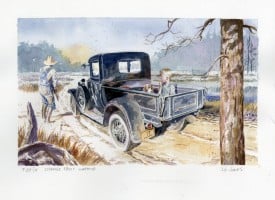 Another example of this innovation is James Tynion’s upcoming Memetic series. Tynion’s The Woods series was the highest selling original series for BOOM! since Waid’s Irredeemable and follows the adventures of a high school that is transported to a mysterious alien planet and has to struggle for survival. His next series is Memetic, a miniseries about an image getting posted online and leading to the end of the world in three days. The story will be told over three issues (one for each day) and is Tynion’s most “nihilistic” work. 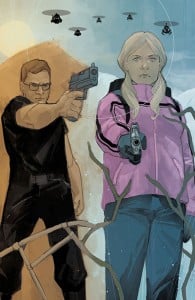 A creator making her debut for BOOM! in 2014 is Marguerite Bennett, who has recently written the Batman Annual as well as Lobo, Lois Lane, and Joker’s Daughter one-shots. She will be writing a four issue miniseries based on Fox’s Sleepy Hollow TV series and the crime/spy graphic novel Butterfly for BOOM!’s Archaia imprint. Bennett said she is most excited about Sleepy Hollow and even turned in her latest script ahead of time. The comic will have the darkness and campiness of the show, and Lumberjanes writer Noelle Stevenson will do two page backups for the series. Butterfly is a miniseries based on a screenwriter’s idea about a father and daughter, who are spies in different eras, namely, the Cold War time of traditional espionage and post 9/11 cyber espionage. The book will be split in half and will tell the daughter’s story forward  in hot colors and strong inks ending on a splash page and then tell the father’s story backwards with dark colors and thinner ink washes.

Other projects coming out from BOOM! include The Musical Monsters of Turkey Hollow, which is based on an unproduced Jim Henson project in which puppets appear in the real world. It will be written and drawn by “cartoonist’s cartoonist” Roger Langridge (Judge Dredd) and feature pictures of the original puppets and Henson’s notes in the comics’ back matter. Langridge will also be working on a creator owned, all ages comic called Abigail and the Snowman, a four issue miniseries about a young girl and her pet yeti. Mouse Guard creator David Petersen will be collecting the 2011 to 2014 Free Comic Book Day Mouse Guard stories along with two new stories in the Baldwin and the Brave and Other Stories collection. along with these announcements, Sabik and Gagnon talked about BOOM!’s long term commitment to all age titles and developing the talent of the future with things like artist submissions on Facebook. This process has gotten Deviant Art and webcomic artists gigs at BOOM!.

Towards the end of the panel, there was a surprise guest: Frank Cho, the writer/artist of the independent series Liberty Meadows, which Gagnon said he passed around in college, and Marvel books like Mighty Avengers and Savage Wolverine. Frank Cho will be writing and drawing an original series for BOOM! called Skybourne, which is coming out in September 2015. Between making jokes about the “porn” status of some of his work, Cho said the series will be four issues packed with story on an “epic scale”.After a few fan questions about BOOM!’s submission process, the panel closed with a video of BOOM!’s staffers describing themselves in one word mixed with art from various BOOM! comics.