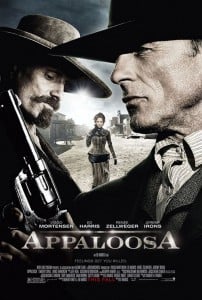 Every resurgent genre needs a set of pale imitators to go with its breakthroughs, and to that end we have Appaloosa, a staunchly traditional Western helmed by Ed Harris, who also co-stars and co-wrote the film’s screenplay. That means he’s partially to blame for the film’s greatest setback: its unimaginative plot and lazy characterization.

Harris and Viggo Mortensen play a two-man peacekeeping force operating in New Mexico territory in the mid-1800s. They help stabilize budding towns by becoming the town’s legal enforcers, then move on when there’s no more money to be made. They arrive in the eponymous town seeking to contain a fast-drawing hoodlum (Jeremy Irons) who’s wanted for multiple murders. Things get complicated – in the most contrived possible fashion – when a lonely widow (Renee Zellweger) arrives and pais up with Harris’ grizzled gunslinger, despite his protestations that “feelings get you killed.”

The screenplay’s problems are legion, and most involve a lack of dramatic exploitation. There’s always fun to be had when you’ve got Irons in a fiendish capacity, but he’s not given anything to work with beyond a capacity for a quick draw and a few dry quips. There’s potential in the idea of these roving “peacekeepers” and the ways in which they establish and enforce laws of their choosing, but that dimension lays unexplored. Most egregiously of all, however, is the inclusion of Zellweger’s character Ally – one of the least useful love interests in recent memory. She pouts and philanders seemingly without motive or method beyond the idea that she simply goes for the alpha dog – even by Western standards it’s a ridiculously misogynistic character, and Zellweger is stuck grimacing her way through it. A major disappointment.