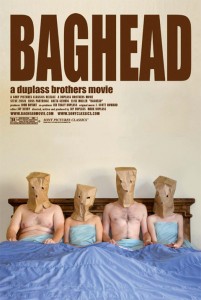 directed by Jay and Mark Duplass

At once a deconstruction of the creative process and an extended look at the mechanics of fear, Baghead is an engaging little indie that flirts with “mumblecore” drama, low-budget horror, and awkward comedy, before ultimately revealing itself as just one of them – it would qualify as a spoiler to say which, since part of the film’s appeal is the uncertain manner in which it proceeds. Baghead opens with one of the funniest scenes I’ve seen all year, a lampoon of film festival culture that’s both over-the-top and unnervingly accurate. Our protagonists – rough-hewn cool guy Matt (Ross Partridge), his on-again, off-again girlfriend Catherine (Elise Muller), doughy dogooder Chad (Steve Zissis) and party girl Michelle (Greta Girwig) are attending the premiere of an acquaintance’s film, entitled We Are Naked. (There’s nudity involved.) The banal question period that follows the film will delight anyone who’s ever stayed after a film at a festival to hear the unwashed masses fellate questionable talent.

With all four principals being out-of-work actors, they decide they can make a better film than the one they’ve just been forced to sit through, so they isolate themselves in a cabin in the woods for a weekend with the aim of simply brainstorming an entire film. Their interpersonal tensions make these sessions awkward, so when Michelle has a creepy dream involving a man with a bag over his head, they leap at the chance to base a horror movie around it. Eventually, however, the Baghead starts making appearances in reality, and it must be determined whether they’re being stalked from within or without the group.

If I’ve made it sound like a straight-up horror film, then I’ve done Baghead a disservice – it’s a very funny film that has a handful of tense scenes, as well as a generous helping of touchingly real ones. Its characters, and nothing else, are what make the film work – Chad’s pining for the flippy, inconsiderate Michelle is genuinely both sad and funny, and Matt’s determination to get something – anything – completed denotes both drive and desperation, with Partridge inhabiting a space somewhere in between. Unlike many horror-themed films we’ve seen this year, the movie doesn’t rely on any deeply illogical twists – a blessing in and of itself. While it’s a slight film – as revealed by its deliberately low-key ending – Baghead succeeds on terms entirely its own. 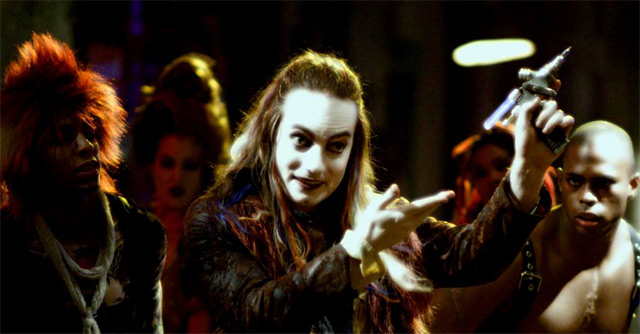