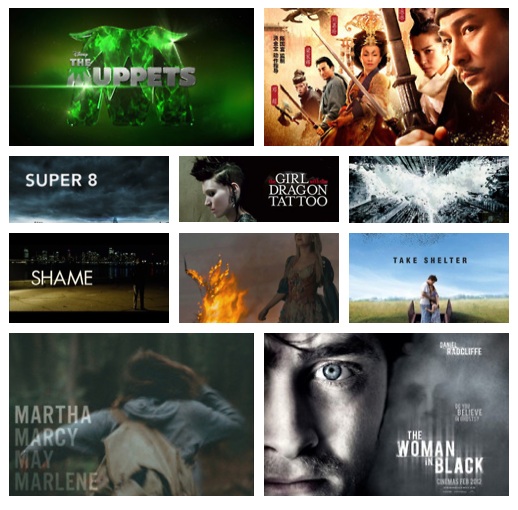 It seems like it was only yesterday when I posted the best trailers of 2010 with the trailer for Terrence Malick’s Tree Of Life taking top honours. As we continue our look back at 2011, we’re once again reminded of a few things: Movie trailers have become a medium unto themselves, but you should never pre-judge a movie by its trailer, nor should you ever raise your expectations for a film too high based on the neatly packaged two minutes of footage we get. Remember folks, great expectations only lead to big disappointments. Sometimes we’re so excited to watch the first footage from a movie that we forget they are presenting only a glimpse at what is usually an unfinished project. Case in point: Many fanboys were up and arms over the dodgy effects in the Green Lantern trailers earlier this year, not realizing the effects were not yet fully completed. The job of the editor is to sell the movie, and convince an audience it is worth their time and money, and sometimes the trailer actually ends up being better than the movie itself. Other times the trailers are a little too long, and sometimes they feature too many of the film’s highlights but every now and than, editors along with their marketing team dare to venture into an unconventional route (IE the trailer for A Serious Man). Picking our 10 favourites wasn’t so hard this time around since most of the trailers from 2011 underwhelmed audiences and left them wanting nothing to do with the movie at all. Here are the ten best trailers of 2011.

11- The Muppets – Being Green Parody Teaser

I think it’s safe to say that The Muppets had the best marketing of any film released in 2011. There were several parody teasers but my personal favourite is Being Green. It has the best gag of all the parodies heard towards the end of the trailer, and it also features my favourite line from the movie, delivered by our two favourite critics, Statler and Waldorf. The teaser was such a success that in retrospect, it is far more entertaining than the film it parodies.

If this trailer doesn’t make you want to see the film, than you’re not a lover of Asian action cinema. While the trailer does kick off with all-too-familiar narration detailing the story, the footage selected from the action packed martial arts sequences will quickly win you over. But what makes this trailer so great is a combination of the quotes assembled from various critics (my personal favourite by the N.Y. Mag), and the badass music, which kicks in halfway through.

Fans got their first real look at footage from the JJ Abrams-directed ’80s throwback to Steven Spielberg productions during the Super Bowl last January, but it was only a few months later that the studio dropped the first real trailer online – a two-and-a-half minute montage of pure Spielberg nostalgic euphoria, so much so that the trailer even opened with the Amblin logo.

8- The Girl With The Dragon Tattoo 6 Minute Trailer

I’m not a big fan of long trailers; the shorter the better, I always say. However David Fincher had one major advantage with marketing The Girl With The Dragon: most cinephiles were already familiar with the story, thanks to the previous film adaptations of Stieg Larsson’s book series.

So there wasn’t much to spoil for fans of both the book and the recent Swedish film adaption. Yet, the trailer’s editors were careful in building anticipation without spoiling a single major plot detail for those unfamiliar. Even after eight minutes, not much is revealed, as the editors wisely keep its secrets safe.

Of the three trailers released for Martha Marcy May Marlene, the very best is without a doubt the third, featuring the voice of John Hawkes singing “Martha’s Song.” The trailer mirrors the film’s flashback structure, using random shots to draw comparisons between Martha’s life before, during and after her time in the cult.

The trailer for Take Shelter is masterfully crafted, creating an aura of unease and uncertainty of what audience should expect. The images are both harrowing and visually poetic, expressing the anxiety that audiences might experience when watching this film and much like the movie, the trailer continuously teases the audience to question whether Curtis is a paranoid schizophrenic, a prophet, or something in between.

The first teaser trailer for Christopher Nolan’s final installment of the Batman franchise was short but sweet – offering just a glimpse of Bane, and doing precisely what teasers should do: tease. Dark, complex and unforgettable, The Dark Knight Rises teaser succeeds not just as an entertaining montage but by also offering us cryptic images. You got to love the haunting chants we hear from Bane’s followers, the brooding score by Hans Zimmer, and the image of the bat symbol amidst a crumbling Gotham City; an image mirroring the beautiful poster design released a few weeks earlier.

It’s not because Sound On Sight contributor Justine Smith was quoted in the trailer for the Wicker Tree that we decided to include it on this list. In truth, it is because the rest of the SOS gang wouldn’t believe Justine when she tried to convince us that the film was worth watching. So many of us shrugged it to the side after reading some negative press, but the trailer sure as hell makes us regret not seeing the film when we had a chance. Regardless if Justine is right or not, the trailer makes The Wicker Tree seem like essential viewing for any horror cinephile. The sound design is intense, Christopher Lee is frightening, the gospel tune is a nice touch, and the imagery is both beautiful and haunting. Take notice of one specific shot that resembles a scene from the prologue to Lars von Trier’s Melancholia.

Susan Hill’s thriller novel, “The Woman in Black,” has already spawned one adaptation, the 1989 television movie of the same name. While creepy, the book really deserves a big screen vision, and thankfully that problem will be remedied when a new adaptation hits theatres in February 2012. I wasn’t fond of the second trailer released for the film, but the first still stands out as one of the year’s best. That trailer (seen in the video below) perfectly captures the creeping sense of menace from the novel. You got to love the eerie/twisted nursery rhyme, the creepy children, the strange dolls, the images of the shadowy haunted house, it’s foggy surroundings, and especially that one shot revealing someone arising from beneath the muddy ground.

In my humble opinion Shame might very well be the very best film of 2011. The trailer does the film justice, presenting a very sullen, austere snapshot of the film’s major themes: emotional disconnection and self-loathing. With the help of Harry Escott’s brooding and intense score, the trailer really had the hairs on my arms standing up.

The teaser trailer for Ridley Scott‘s Prometheus is layered with some of the most increbile new images I’ve seen this year, while mixing in imagery from his 1979 classic sci-fi horror film. The reason why it makes it number one our list , is simply because the trailer is cut in the same style as the trailer for the first Alien film.