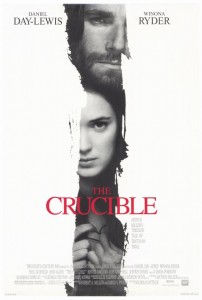 Arthur Miller’s story of hysteria, persecution and social injustice, The Crucible, was written during Senator Joseph McCarthy’s House Un-American Activities Committee hearings (for which Miller was called to testify in 1956). Miller has never claimed that his story is historically accurate, but many of the facts correspond to events that actually occurred in Salem, Massachusetts in 1692 when a superstitious terror gripped the Puritan town. 19 villagers were hung as witches, four others died in prison and one was pressed to death when he refused to answer questions. The Crucible offers a layered examination of mob hysteria, and of the Puritan mindset on which America was founded in a community destroyed by guilt, prejudice, paranoia and betrayal. Well-paced direction, and fine performances from Daniel Day-Lewis, Winona Ryder and Joan Allen. 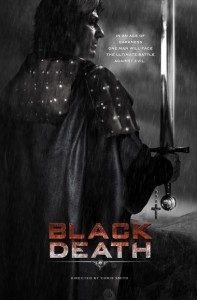 Director Christopher Smith deserves credit for his ambitious attempt at doing something far different from his previous body of work. Unlike his by-the-numbers Hollywood thriller Triangle, Smith produces his most original and most mature film to date, wisely opting to engage viewers in the battle between religions, superstitions, and witchcraft. While the relentlessness of the movie’s downbeat nature may not appeal to mainstream viewers, Black Death proves itself to be a challenging and rewarding experience that sticks to its dark roots. Smith creates a genuinely creepy atmosphere by shooting entirely on handheld 16MM (albeit on excellent stock) giving the pic a cold, grey look stripped of most colors and textures. Most impressive is the complete lack of CGI. Relying on real stunts and prosthetics, Smith piles on the gore and blood, courtesy of several set-pieces of sword-swinging action. He also orchestrates some incredibly tense moments including the gruesome climactic crucifixion. 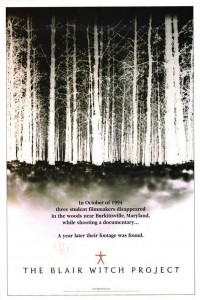 Tagline: “In October of 1994 three student filmmakers disappeared in the woods near Burkittsville, Maryland, while shooting a documentary…A year later their footage was found.”

The Blair Witch Project is an homage to sitting by the campfire and listening to urban myths and various ghost stories, something most of us can relate to. However, the primary reason for its success is that it keeps audiences in the dark about its titular villain. Using techniques that would make the Dogme 95 guys proud, The Blair Witch Project remembers that nothing onscreen can be as scary as your own imagination. It understands how to build anticipation and deliver the scares at precisely the right moment. Unlike most horror films, The Blair Witch Project isn’t simply designed to make you jump or gross you out. It’s designed to make you feel discomfort, nausea and general panic, and people respond by saying it is the scariest film of all time simply because it feels so real.

Tagline: “The Only Thing More Terrifying Than The Last 12 Minutes Of This Film Are The First 92.”

The king of Italian horror, Dario Argento, directs what many consider to be his masterpiece. Suspiria boasts the most arresting tagline for any horror film, but that’s not all. It’s one of the most 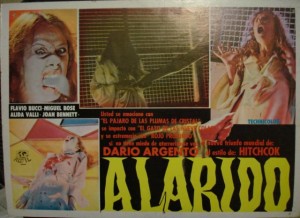 important and influential genre movies ever made, and essential viewing for all horror fans. Argento’s first major non-giallo directing job doesn’t stray too far from the style he established in his previous film Deep Red. Suspiria’s overall charm resides in its technical triumphs and visual style. Taking his cues from Mario Bava, Argento, together with his director of photography Luciano Tovoli, creates a vibrant, colorful film quite apart from the standards of the genre. Argento’s masterful use of intense primary colours (he acquired 1950s Technicolor stock to get the effect), and stunning set designs gives the whole film a hallucinatory intensity. The dissonant, throbbing score, composed by Argento and performed by his frequent collaborators, Italian rock band Goblin, drives the picture with the occasional distorted shriek of “Witch!”. A strange combination of the art house and horror film, Suspiria, although cited as one of the scariest movies ever made is, ironically, one of Argento’s least violent films. It relies more on tone and atmosphere than on blood and gore. Surreal and frightening, Suspiria still shocks audiences decades after its original release. 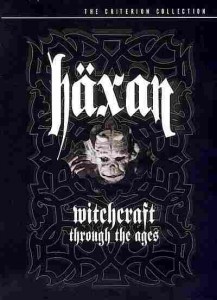 Häxan (a.k.a The Witches or Witchcraft Through The Ages) is a 1922 Swedish/Danish silent  documentary about the history of witchcraft, told in a variety of styles, from illustrated slideshow to dramatised events of alleged real-life events that are comparable to horror films. Written and directed by Benjamin Christensen, and based partly on Christensen’s study of the Malleus Maleficarum, Häxan is a fine study of how superstition and the misunderstanding of diseases and mental illness could lead to the hysteria of the witch-hunts. While the film does a great job exposing the horrors of superstition and hysteria, it really doesn’t feature any  witchcraft – but still deserves to appear on this list. At the time it was the most expensive Scandinavian film ever made, costing nearly two million Swedish krona. Although it won acclaim in Denmark and Sweden, the film was banned in the United States and heavily censored in other countries for what were considered at that time graphic depictions of torture, nudity, and sexual perversion. Depending on which version you’re watching, the commentary is either in the form of intertitles or narration by William S.Burroughs, recorded in the mid-1960s. A fascinating historical document, and, more surprisingly, a very entertaining film, and one of the earliest films that takes misogyny and sexual repression as its subject.

A brilliant but somber tale –  a visually stark masterpiece  – and a truly haunting and  unforgettable film. Danish 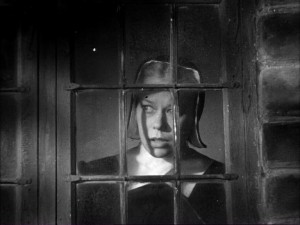 director Carl Theodor Dreyer’s 1943 parable about witch-finding and witch-burning in 17th-century Denmark, is a brilliant psychological thriller about the pull of religious dogma to oppress and punish weaker souls. A distressing study of good and evil, repression and oppression, sexuality and guilt and a film not to be missed.

Tagline: “The Greatest Picture in the History of Entertainment!”

The groundbreaking visuals and deft storytelling are still every bit as resonant and the songs and magic are still fresh, 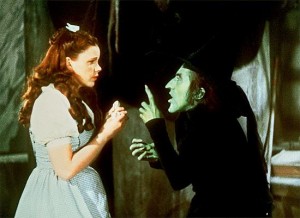 even decades later. Wizard of Oz is not only one of the best family films ever made but one of the very best ever of any genre. Oz has become an essential part of the popular culture – superb in every aspect, with outstanding art direction, music, and performances by stars Judy Garland, Ray Bolger, Bert Lahr and Jack Haley. Oz is near flawless and critic-proof. To this day, the Wicked Witch of the West remains the most iconic of all witches in film.