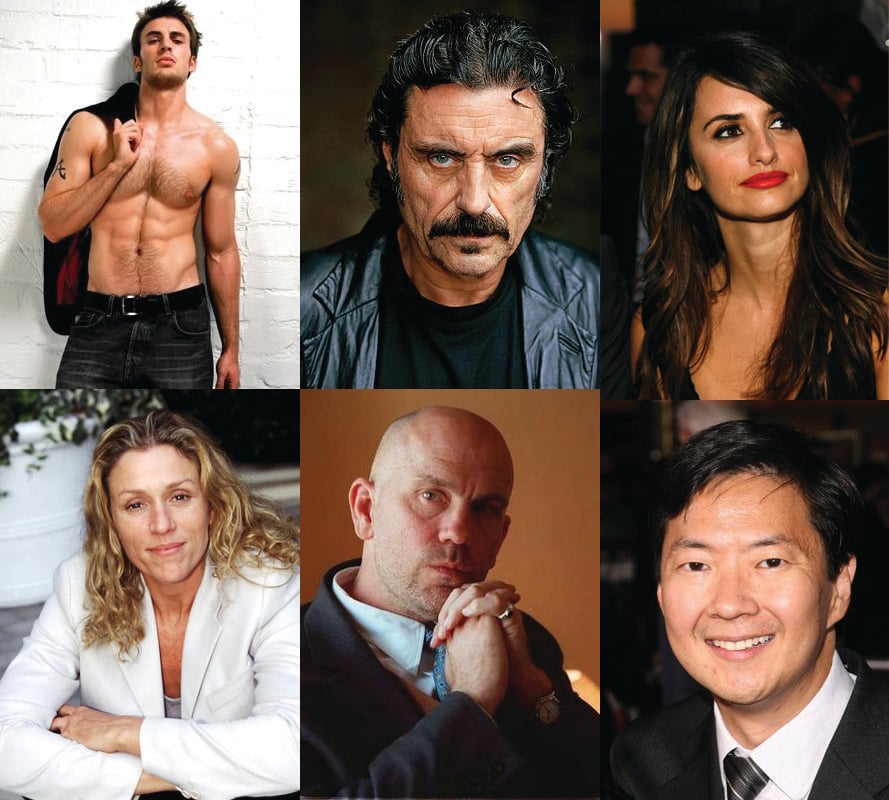 There has a been a lot of epic casting as of late for three very giant films coming up within the next few years. Chris Evans, Ian McShane, Penelope Cruz, Frances McDormand, John Malkovich, and Ken Jeong have all been confirmed to be a parts of in the mega franchises of Transformers, Captain America, and Pirates of the Caribbean. To find out who is casted in what and how they will be a part of these films continue reading after the jump!

First off we have Chris Evans (Fantastic 4 as The Human Torch/Johnny Storm) who will take on the role of Steve Rogers aka Captain American in Marvel’s The First Avenger: Captain America. I believe that this was the best choice out of the potential suiters for the character, the others being Channing Tatum (G.I. Joe: The Rise of Cobra) and Chace Crawford (Gossip Girl). Out of all three choices, Evans was probably the best choice. The Heatvision blog has confirmed the deal is done and the contract is being finalized. I think Marvel Studios definitely could have taken more thought and consideration to choose someone more suitable. Chris Evans is better known as the Human Torch in the first two Fantastic Four films, but those are getting rebooted anyhow. With his somewhat cocky, somewhat comedic, role in those films, was it wise to choose Evans to strap into the red, white and blue? Evans isn’t a terrible actor, but his image is just tainted from his previous Marvel role. We’ll have to wait and see how this works out and it could perhaps turn into a Ryan Reynolds/Dead Pool outcome, which turned out pretty decently. The First Avenger: Captain America will be directed by Joe Johnston and filming will begin this June in the UK for a release date in 2011.

The next big casting news has to deal with Pirates of the Caribbean: On Stranger Tides. This story is going to be based loosely based off the book by Tim Powers, On Stranger Tides, with a focus on the infamous pirate Blackbeard. Who will be playing Blackbeard, none other than Ian McShane (Hot Rod, Death Race, and Deadwood). Many film sites have confirmed that McShane is in talks for the role of Blackbeard. McShane does have the look for the role, but does he have the star power to stand alongside Johnny Depp and Geoffrey Rush who have also been confirmed to return. Along with McShane, Penelope Cruz (Blow, Bandidas, Nine) has also been confirmed to be in the Pirates sequel who has recently been revealed to play the role of Blackbeard’s daughter. Having played opposite Depp before, Cruz seems like she would be a fun feisty opposite to Depp’s swashbuckling stumbling drunk Jack Sparrow. As seen in Vicky Christina Barcelona, Cruz can be a pretty colorful character who holds her own on screen. I think both casting choices are pretty spot on and am actually interested in seeing this film depending on future developmental progress of the film. Rob Marshall (Annie, Chicago, Nine) will be directing the film with Jerry Bruckheimer (Pirates 1, 2 & 3) producing again. Filming should also begin this year in Hawaii and looking at a 2011 release date.

To cap off this epic series of casting notes, Michael Bay has got his sites on finishing the Transformers trilogy. Bay  has confirmed on his personal blogthat he has casted Frances McDormand, John Malkovich and Ken Jeong to appear in Transformers 3. According to Deadline, McDormand is going to play the National Intelligence Director and Malkovich to play Shia LeBeouf’s first boss. These events are a few years after the events in Transformers: Revenge of the Fallen and I am assuming maybe a year or two post graduating for Sam Witwicky. Will we get the nickname ‘Spike’ thrown in the mix ever? Megan Fox, Josh Duhamel, and Tyrese Gibson have all been acquired for the next film along with Kevin Dunn in talks to return as well. Bay has stated that this is going to have a lot less robots and focus more on story, we’ll see about that Mr. Bay. Jeong’s character hasn’t had a character mention yet, but I’m sure its going to be something minor like Bernie Mac and Rainn Wilson’s roles in the previous films. Can big name Academy Award winning actors save the franchise from totally sucking more or will they just get pee’d on by giant robots as well? I hope that there is a return to Cybertron or some sort of ‘Space bridge’ will make an appearance in the next film as I being a giant Transformers nerd. Frompreviously leaked concept art had revealed that there may be possible other planets and species involved in this film, which include the Junkions on the Planet of Junk. Pre-shooting begins next month and principle photography will probably start around May or June this Summer in various locations (LA, Chicago, Washington DC, Florida, Texas, Africa, Moscow, and China).