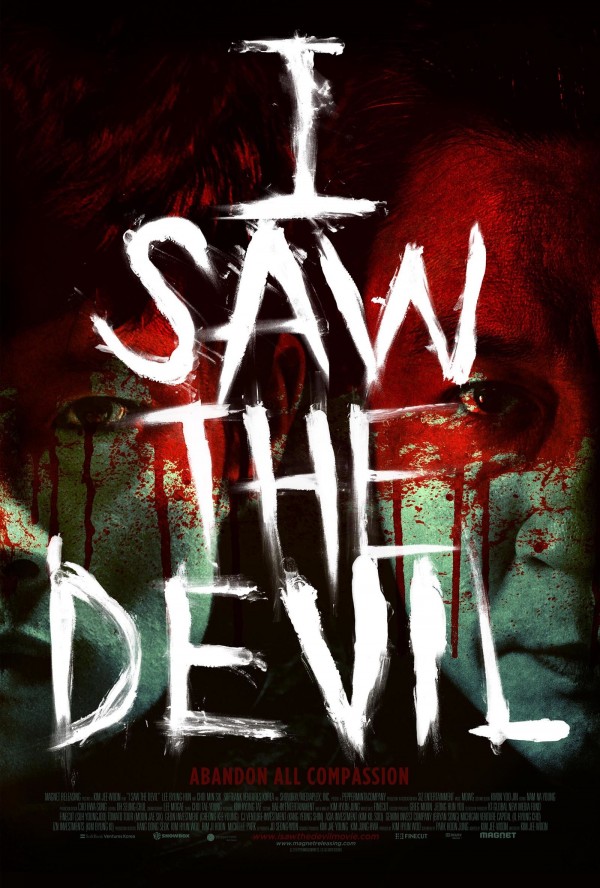 There’s no doubt that I Saw The Devil will become a staple of late night festival strands for the next year. Kim Ji-woon‘s extremely intense thriller was a hit at last years Toronto International Film Festival and now it is set to screen at Sundance later this month. Our Austin correspondent Emmet Duff wrote a raving review when he saw the film at Fantastic Fest, and now a new US poster (seen above) has been released, and it looks great.

Below you will find the official plot synopsis as well as a trailer. I highly recommend you check it out whenever you get a chance.

A remorseless psychopath stalks deserted roads looking for women to rape and slaughter. But when he murders the pregnant fiancée of a secret-service agent, the tables turn, and the stalker becomes the prey as the grief-stricken agent pursues a gruesome revenge. Soo-hyun hunts down the killer but does not turn him over to the authorities. Instead, he exacts a punishment designed to make the psycho truly suffer. The sadistic mayhem escalates as the pair enact a gory cat-and-mouse game that quickly spirals out of control. As excellently crafted as it is blood soaked, Kim Jee-woon’s hard-edged revenge thriller leaves an indelible mark on its audience. The brutality and unrelenting violence of I Saw the Devil is only half as jarring as its unflinching portrait of the dark side of human nature.

I Saw The DevilKim Ji-woon