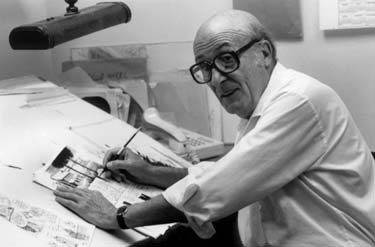 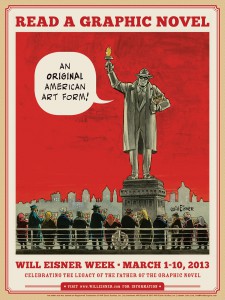 Welcome to Eisner Week. Every year during the week of March 6th, the birthday of Will Eisner, comic book and graphic novel fans around the world celebrate the achievements of one of the comic industries most pioneering legends. All this week at Sound On Sight, the Comics section will devote the bulk of our coverage to honoring the work of Will Eisner and the impact his work and tireless championing of new artists has had on today’s comics culture.

Will Eisner paved the way for both avenues associated with comics today. Whether you call comics “visual narrative,” “graphic storytelling” or “sequential art,” it is important to know from where this idea of comics as art evolved. As a comic strip creator in the 1930’s, Eisner moved from WOW Magazine to the creation of his own imprint with partner Jerry Iger. Eisner & Iger Studios assembled what could be best described as the comic creating Justice League, a team including Bob Kane and Jack Kirby, both legends in their own right. From there, Eisner would go on to create The Spirit, his most well-known and longest running series about a masked urban vigilante. As a work prioritized around focused storytelling, Eisner’s The Spirit would lay much of the groundwork for the story-driven superhero comics of today. 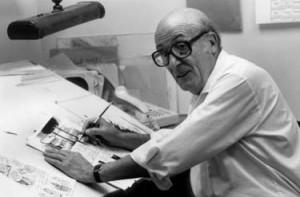 Eisner’s most important gift however, was the Graphic Novel. With his book of thematically linked short stories, The Contract With God, Eisner created a new genre that was equal parts comic and literature. Putting the panel-driven art of comics to more mature and lengthy stories, the graphic novel was born and would go on to find its place as a celebrated body of work in American and International literature. Eisner led the charge for graphic novelists from Art Spiegelman (Maus) to Marjane Satrapi (Persepolis) and is in many ways responsible for the maturation of a genre once regarded as fluff.

Eisner passed in 2005, though his legacy survives posthumously through the Eisner Awards, the Oscars of the Comics Industry presented each year at San Diego Comic Con. This week we will look back at some of Eisner’s greatest and most personal works and celebrate some of the artists, writers and Eisner Award winners who have further propelled the medium from entertainment to art.

Please come along and celebrate Eisner Week at Sound On Sight.