Writer and Producer Carlton Cuse has had a very prolific career, being involved with two series, The Strain and Bates Motel, that are currently on the air. One of the most famous shows he’s been involved in, however, is the ABC series Lost, which ended in 2010. Unwilling to rest with working on only two shows, Cuse is set to reunite with Lost star Josh Holloway on his new series on USA, Colony, which Cuse co-created with Ryan Condal. Unfortunately, despite the pedigree, the show itself shows little promise, as its hamstrung by generic plotlines and poorly developed characters.

One of the key issues with Colony is that its world-building provides nothing compelling, instead only raising numerous questions that the show seemingly has no interest in answering. This would be acceptable if the rules and regulations of the society being seen were compelling enough to put off the questions of how the world got to this place, but that is not the case here. Instead, what’s presented are generic symbols of oppressions, black-clad soldiers in black vehicles with no sense of hierarchy among their ranks. In addition, the infrastructure presented in the pilot raises its own questions about how long such detailed actions must have taken, questions the pilot makes no real attempt at answering. While there’s something to be said for the idea of jumping right into a setting and letting the audience pick up on the history from context, no such context is provided here, leading to questions that are not only not answered, but not addressed either. While certain scenes of the governing regime flexing its might are interesting, the show seemingly relies on the audience becoming invested in the central mystery, which doesn’t prove intriguing enough on its own to be a draw. This may change in future episodes, when more is revealed about the ruling group, but there’s nothing in the pilot to keep the audience watching until that reveal. 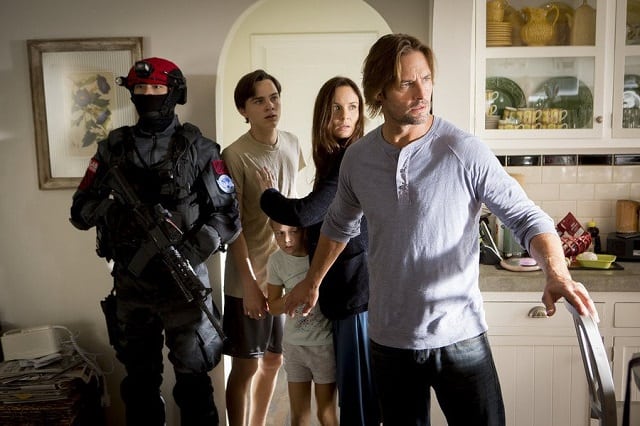 Of course, with a show such as Colony, when the central mystery is not enough to pull in an audience, compelling characters can do so. The show, however, fails to deliver any of these in the pilot episode as well. Few characters get any dimension, with only Josh Holloway’s Will Bowman and Sarah Wayne Callies’ Katie Bowman getting any real development. This is faint praise, however, as defining aspects of their characters are held back until late in the pilot, and there aren’t enough secondary shadings to make them interesting ahead of the key reveals. Both Holloway and Callies do their best with the material they’re given, but there’s very little for them to do other than react to what’s happening around them. This, however, still puts them ahead of every other character save for Peter Jacobson’s Alan Snyder. This is particularly egregious in the case of characters such as Amanda Righetti’s Madeline and Tory Kittles’ Broussard, both of whom seem to be present only to provide exposition to explain character actions. There is some potential to further develop the secondary characters, but that will depend entirely on whether the show expands its focus out from the Bowman family or not. Looking out to the larger world of the show has the potential of bringing in more interesting characters who could hold the audience’s attention, particularly from the two main groups in between which the Bowman family finds themselves.

This is not to say the show has no redeeming factors. The show’s detailed world-building is a double-edged sword, because while it raises questions about how the ruling society was able to do so much, it also makes for a fascinating watch and adds some much-needed colour and uniqueness to the series. The science fictions aspects of the show are underplayed in the pilot, which also ends up being a strength, as they show potential to be fascinating elements of the series down the road. The invader aspect of the series is another double-edged sword, as the potential it allows for in the lack of detail could be a promising aspect of the show, but the way the character and the episode talks around it makes for awkward writing, and points to only one plausible conclusion in such a way that not talking about it makes the whole situation even odder than it already is. However, if the show capitalises on the characters not talking about their oppressors and goes in a different direction than is indicated in the pilot, it’ll make the episode look worse in hindsight. In many ways, this highlights the biggest issue wit the show; any positive attributes are simply potential, based on brief glimpses in the pilot, and it’ll be up to the writers to steer the show towards its potential. The pilot gives no indication that the series is capable of doing that, however. If the show goes uphill from here, it’ll develop into something worth watching. If it maintains this level of quality, however, it’ll be another addition to the loss column of tv series with Josh Holloway in the lead.