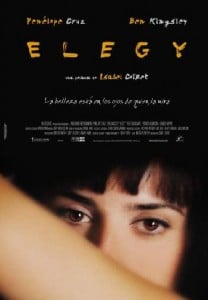 Directed by Isabel CoixetAfter a string of misfires both high-profile (The Wackness) and less so (A Sound of Thunder), it’s wonderful to see Sir Ben Kingsley back at the top of his game in Elegy, a new drama adapted from Phlip Roth’s The Human Animal – but Kingsley’s resurgence is not the only cause for celebration here. Sidestepping most (if not all) of the obvious pitfalls typically associated with its low-key subject matter, Elegy works astonishingly well both as a showcase for some very strong performances but also as a meditation on love, mortality and contentment.

Kingsley stars as David Kapesh, a successful novelist and professor whose life consists mostly of heated discussions with his friend, poet George (Dennis Hopper) and intermittent bouts of sex with the similarly commitment-phobic Carolyn (Patricia Clarkson). Kapesh was stung by a marriage that ended badly, leaving him distanced from his adult son (Peter Saarsgard), who remains bitter about his father’s abandonment. Kapesh is seemingly content with his arrangement, until he meets Consuela (Penelope Cruz), a student, and falls madly in love for the first time in his life. As their affair progresses, Kapesh is forced to assess his life’s trajectory and what it means to retain desire at an advanced age.

Film adaptations of heady novels tend to overstress their “literary” credentials through overwrought presentation devices and overbearing narration – that’s mostly avoided here (although Kapesh does narrate portions of the film, and not always helpfully), allowing the film to rest in the very capable hands of its stellar cast. The aforementioned Kingsley is note-perfect, inspiring both empathy and an appropriate amount of emotional distance from the audience when appropriate. He and Cruz exhibit the most palpable erotic and romantic chemistry I’ve seen so far this year – no small feat, since they’re far from the most likely pairing. Cruz has perhaps the most difficult role in the film – Hopper’s poet expresses concern over the “invisibility” of beauty, and the manner in which the male gaze can never truly penetrate the sight of a beautiful woman in order to truly identify the person in question. Cruz is indeed beautiful enough to create that challenge, so every moment she’s onscreen becomes a dare for the audience to scrutinize her more carefully. The supporting cast is uniformly excellent – particular note should be made of Hopper, who plays a regular human being here (and not a snivelling villain) for the first time in what ages, and Clarkson, who, at her (relatively) advanced age, is made to present a parallel image of female beauty to match Cruz’s. It works.

Easily the best American prestige picture I’ve seen so far this year (though admittedly coming before the fall deluge of Oscar hopefuls), Elegy is touching but not syrupy, keeping itself palpably human and grounded where a lesser treatment of the same material might have buckled under the weight of the plot’s overlapping thematic strains. Even if Sir Ben’s recent offerings might have turned you off the guy for a while this is more than worth a look.