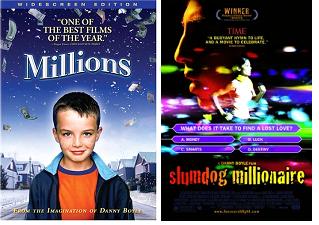 One of Britain’s most celebrated breakthrough talents of the ’90s, director and producer Danny Boyle made his name with his acclaimed 1996 adaptation of Irvine Welsh’s Trainspotting. An angry, funny and groundbreaking film about a group of heroin addicts that took a non-judgmental approach to drug use, the film won equal parts praise and controversy, as well as lasting fame for its director. Since than Danny Boyle has tackled many genres – be it the sci fi thriller Sunshine or the George Romero inspired 28 Days Later and lets not forget his first film, my personal favorite – a Hitchcockian thriller Shallow Grave. Only today we’ll be spending our time talking about his lighter side of the spectrum. With Christmas approaching, we will take a look back at his X-mas / family film Millions but not before reviewing his latest film Slumdog Millionaire.