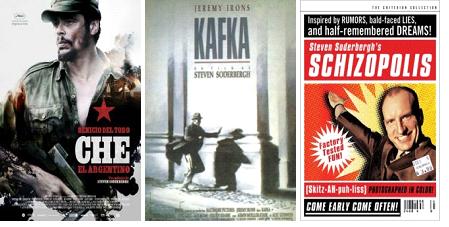 Up to this point, the career of Steven Soderbergh has unfolded like every independent director’s wet dream. His early films, such as 1989’s sex, lies and videotape, were the sort of intimate, deeply personal stories that stun film critics at Sundance but tend to find less success when playing alongside Rocky sequels. Nevertheless, the director has found great commercial success in recent years, with films like Erin Brockovich and Ocean’s 11 ringing in millions at the box office and, in the case of 2000’s Traffic, earning Soderbergh an Oscar for Best Director. Since then, he’s alternated commercial studio fare with low-budget, indie-friendly work. His latest film, the $60 million dollar, four-hour epic Che, may be a perfect synthesis of these two seemingly contradictory styles. Tonight, Sound on Sight takes a look at Che parts 1 and 2, as well as Schizopolis and Kafka, two of the eclectic director’s lesser-known films. Please note that tonight, host Ricky D will be replaced by guest star Mariko McDonald.