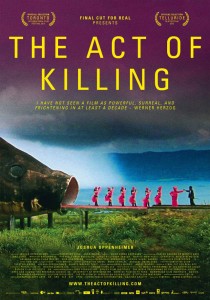 “Two wrongs don’t make a right.” As far as truisms go, it’s not a bad one, but it’s not generally a terribly useful one when it comes to film criticism, as Joshua Oppenheimer’s endlessly disturbing The Act of Killing proves. It’s difficult to dispute that, on a certain level, the film enables its subjects, who happen to be some of the most prolific, remorseless killers on the fact of the planet. But it’s equally difficult to deny that their social and political context has already enabled them to a much greater, and much more destructive, degree, and that the depths the film plunges into would not be possible without indulging the loathsome thugs at its center.

From 1965 to 1966, the Indonesian government killed an estimated half-million people as part of an “anti-Communist purge” in response to a failed coup d’état; nevermind that the PKI (the Indonesian Communist Party) may not have even been directly responsible. So great was the task in front of them that the government saw fit to partner up with a loose cabal of local gangsters in order to wipe out its enemies and undesirables more efficiently. Enter Anwar Congo and his pals. Congo was a “movie theater gangster,” helping to import and exhibit forbidden Western films for a tidy profit, so when the time came to perform his “duty” and kill reams of alleged Communists, he took inspiration from his favorite films, noting the most bloodless means of killing, and adopting a movie-gangster pose while carrying out acts of intimidation and torture. In the present, Congo and his fellow gangsters are heroes. At least, that’s how they’re treated by the government and even the media, who fete them on talk shows and salute them in parades. It’s the stated aim of Oppenheimer, ever-present behind the camera and apparently fluent in Indonesian, to get inside Congo’s head and get an idea of just how one man can rationalize away being personally responsible for the violent deaths of hundreds of people. He does so in a manner befitting “movie theater gangsters”: he enlists Congo and his peers to write and stage scenes re-enacting their war crimes, as well as whatever else happens to come to mind, even extending into dreams, nightmares, or pure fluff, which here extends to a bizarre series of sequences featuring dancing girls, a giant metal fish, an obese war criminal in drag, and a gushing waterfall. The film teems with the kind of outré humor found in the work of Werner Herzog, buut is tempered by a political acuity more in line with the ikes of Errol Morris – so it’s only fitting that both men are credited as executive producers here.

The Act of Killing is ostensibly about the eveil that men do, and the manner with which monsters cope with (or ignore) what they’ve done, but, accidentally or otherwise, it stumbles on a much more disturbing set of ideas. Congo and his pals are reprehensible, certainly, but they were also merely the instruments of a totalitarian regime, unwitting political actors in a much bigger atrocity. As terrible as they are, The Act of Killing argues that they couldn’t have existed without the moral rot at the heart of their government. In its most subversive moments, Killing dares to suggest that there’s not much separating Congo from the average US president; after all, as Congo argues, George W. Bush killed reams of Iraqis (at least 110,000 civilians, to be relatively precise) under false pretenses, but America’s position of power means he’ll never see the inside of the Hague unless he’s on a diplomatic vacation. More recently, President Obama has deployed unmanned armed drones to kill high-profile targets overseas without due process, leaving behind hundreds of dead “non-combatants.” Where is the line drawn between killers and statesmen?

Just as Congo will never truly grasp the weight of his crimes as long as he exists in a political climate that deems them necessary acts of a patriot, The Act of Killing serves to remind us that a world that minimizes political violence can only come about when citizenries hold their leaders and themselves truly accountable. As one subject points out, the people who we see showing up at a rally in support of pro-government forces have all been paid to attend, and secretly loathe every moment. But that knowledge alone isn’t enough to bring Congo or his handlers to justice.

The Act of Killing @ TIFF