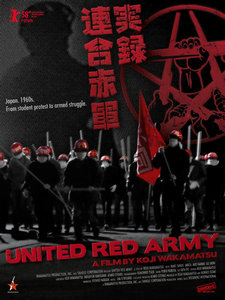 Koji Wakamatsu (Go Go Second Time Virgin), Japan’s most controversial filmmaker, brilliantly reconstructs the most troubling episode in the bloody history of Japanese student-radical extremism through the true story of the United Red Army faction, which had its roots in the 60’s when Japanese students protested America using Japan as a staging base for its war in Vietnam.

In 1972, 14 members of the United Red Army faction lynched each other during group “self-criticism” sessions while training in the mountains and the survivors holed up at the Asama Sanso Mountain Lodge, which quickly degenerated into a ten-day stand-off with the police that is one of the pivotal moments in Japanese history, as famous in Japan as Martin Luther King’s assassination is in America.Wakamatsu’s film is an earnest attempt to process the shock that the Japanese Left was experiencing at the time and to grasp the motivation of the militant students.