When the 44th edition of the Festival du Nouveau Cinema announced their lineup two weeks ago, I wasn’t sure where to even begin when deciding what I should see. The festival which takes place in Montreal from October 7 to 18 is screening nearly 400 films and events in only 11 days. This includes 151 feature films and 203 short films from 68 countries – 49 world premieres, 38 North American premieres and 60 Canadian premieres. Because of it’s strong line-up, there is no possible way to see everything – so we decided to come up with a list of our ten most anticipated films — and trust me, it wasn’t easy. We will of course be covering the event once again this year, so be sure to revisit our site over the next few weeks. In the meantime, here is our 10 most anticipate films.

With a total running time of over six hours Arabian Nights is certainly the longest film screening at the festival, but the sheer amount of cinema it promises is hardly all it has to offer. First of all, the film is screening (as it frequently has) in three parts (the second of which Portugal is submitting as their entry for the Best Foreign Language Film Oscar), so those fearing numb butt cheeks or an undue time commitment for one day need not fear. But length aside, the film looks to be a compelling portrait of life in modern day Portugal, as director Miguel Gomes uses the running time to tell a host of stories from around the country. Borrowing the structure (but little else) of its titular inspiration, protagonist Scheherazade (Crista Alfaiate) narrates the viewer through a wide range of tales, coming together to make a one-of-a-kind film. (Max Bledstein)

After his Palme d’Or win in 2010 for Uncle Boonmee Who Can Recall His Past Lives, Apichatpong Weerasethakul knocked out a stream of shorts, including the one-hour Mekong Hotel, which hit Cannes in 2012. Three years later and the filmmaker returns to his home in Thailand’s troubled northeast region with his feature length Cemetery Of Splendour. TIFF described it as, “a sublime fusion of history, memory, socio-political allegory, and mysticism.” Cemetery of Splendour is my most anticipated film of the festival and judging by the gorgeous visuals, it is something that should be viewed on the biggest screen possible. (Ricky D)

A couple of years ago filmmaker Rick Alverson broke out with his controversial feature called The Comedy, which landed on our list of the 20 best films of 2012. Alverson is back again this year with his followup, Entertainment, starring Gregg Turkingtonas. Outside of Turkington, the film also features one-of-a-kind performances from John C. Reilly, Tye Sheridan, Michael Cera, Amy Seimetz, Lotte Verbeek, and Tim Heidecker. I’ve been told by people who’ve seen it, that Entertainment is a tough and unpleasant watch but also a brilliant film and one of the year’s best. Entertainment is the type of film that you won’t want to watch twice, but will be glad you’ve seen it at least once. (Ricky D)

Jeremy Saulnier’s Blue Ruin came out of nowhere in 2013, wowing critics and audiences with its quiet tale of revenge and revenge for the revenge, and maybe some revenge for the revenge for the revenge if you want to get specific. Lot of revenge is what I’m saying. Since practically the last shot, audiences have been waiting with baited breath to see what Saulnier has for us next. The answer: Deliverance with Patrick Stewart as the lead bad guy. Honestly, I’m already sold. After a punk band wanders into the wrong place at the wrong time, they find themselves hunted by a white supremacists, led by Sir Patrick himself. Most likely some personal growth will happen along the way, with the band members discovering a side of themselves they never knew they had in the name of survival. If Blue Ruin is any indicator, Green Room will be a dark, moody, ultra-violent contemplation on the nature of violence, wonderfully shot and soul-churningly bleak. (Thomas O’Connor)

For nearly three decades, producer Jeremy Thomas has dreamt of bringing J.G. Ballard’s novel High Rise to the big screen, having first approached Nicolas Roeg with the project years ago. All the hard work finally paid off and now the feature length film is about to screen here in Montreal. Tom Hiddleston and Jeremy Irons star in the new film by cult British director Ben Wheatley (Kill List, A Field in England), an ambitious adaptation written by Wheatley and his longtime collaborator and wife, Amy Jump. I wasn’t a huge fan of A Field in England but Kill List is one of my favourite horror films of all time and the novel by Ballard has been cited as an influence on the Doctor Who serial “Paradise Towers”. In addition, one of my favourite composers Clint Mansell provides the score, and the very talented Laurie Rose acted as cinematographer. (Ricky D)

Gaspar Noé has never been a filmmaker who shies away from extremes. As difficult as his work can be to watch, its unforgiving nature also lends it a certain power, and his latest film, Love promises to be no different. As the title and highly explicit posters suggest, the film looks at physical relationships, and Noé depicts them through unsimulated sex scenes rendered up-close and personal in 3D. Naturally, the sex has received more attention than anything else about Love, but there is more to the film, as it tells the story of the on and off romance between Murphy (Karl Glusman) and Electra (Aomi Muyock). Love has divided viewers thus far, but any chance to see Noé’s uncompromising filmmaking is one not to be missed. (Max Bledstein)

Brie Larson has seemed poised to the ‘Next Big Thing’ in Hollywood for years, but she hasn’t quite gotten the star role she deserves. She was outstanding in Destin Daniel Cretton’s moving and underrated group home drama Short Term 12, but the low-budget film didn’t get the audience it merited. Enter Room, People’s Choice Award winner at TIFF and a film garnering talk of a possible Oscar nod for Larson. She plays a woman kidnapped at seventeen and held hostage with her son (Jacob Tremblay), and the two struggle between the trauma of their captivity and their desire for escape. Based on the novel by Emma Donoghue (and adapted by the author herself), Room promises to be a moving drama and a long overdue showcase for Larson. (Thomas O’Connor)

This is Orson Welles

I have a special soft spot for documentaries about films, filmmaking, and especially filmmakers. This is Orson Welles, from French documentarians Clara and Julia Kuperberg, tells the history of not just Welles, but his legacy as one the most celebrated American filmmakers of all time. The film features interviews with not just Welles’ daughter, but Martin Scorsese and film scholar extraordinaire Peter Bogdanovich, who literally wrote the book on Welles, his craft, and his influence on a generation of American Filmmakers. Welles’ life, his struggles with the film industry and his background in theatre and radio are all more than enough to fill a 52 minute running time, leaving the danger that the film will only manage to scratch the surface of Welles’ story, but I think that’s a danger I’m willing to accept. (Thomas O’Connor)

I’m late to the Shion Sono game, having only just been introduced to the Japanese cult darling through films like Bad Film and Love & Peace, and if my film buff friends (many of whom write on this very site) are to be believed, I have a lot of catching up to do. Well get off my back, because I’ve already circled Sono’s Whispering Star as one of my must-sees at this year’s FNC. The story of a robotic delivery girl with time to spare between long-haul trips across the galaxy, Whispering Star looks to be a significantly more moody, contemplative ride than the heartwarming morality play of Love & Peace or the grungy cinema verite of Bad Film, a tribute to Sono’s frankly shocking range as a director. Full of striking visuals and quiet contemplations of the nature of humanity, Whispering Star looks like just the right balance of artful and weird to get me interested. (Thomas O’Connor)

A prolific auteur of the offbeat, weird and bloodsoaked, Takashi Miike’s oeuvre ranges from the colorful and family-friendly (Nina Kids, Yatterman) to the gritty and grotesque (Ichi the Killer, 13 Assassins), all of it profoundly over-the-top. After a noted absence from this year’s Fantasia International Film Festival, Miike’s latest, Yakuza Apocalypse, is set to take Montreal by storm at FNC. The film promises everything Miike fans have come to expect, wrapped up in the tale of a vampiric Yakuza gang member: brutal violence, irreverent humor, biting social satire and possibly a musical number, you never know when Miike’s gonna sneak one of those in. Throw in a special appearance by The Raid star Yayan Ruhian and Yakuza Apocalypse is sure to be a treat for martial arts fans. (Thomas O’Connor) 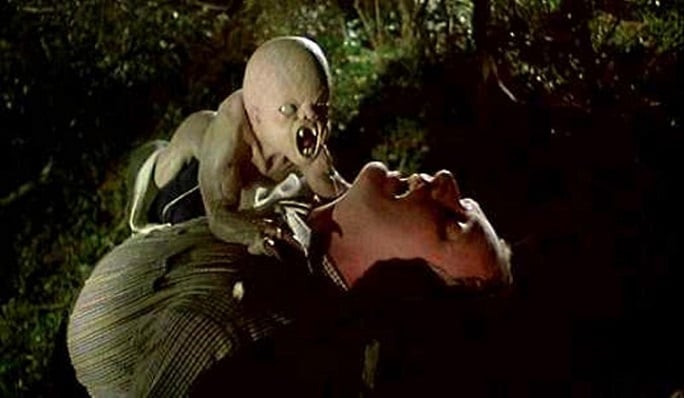