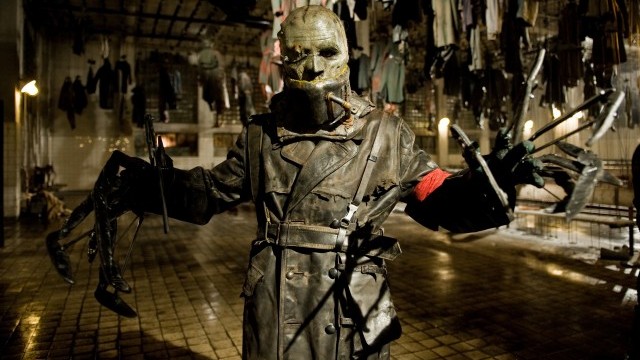 Frankenstein’s Army is the closest thing thus far to a live-action Bioshock adaptation. The second Frightfest feature to resemble a video game – albeit in a positive light – the film forgoes the tiresome trademarks of the found-footage format, its curious lens rendering the entire escapade a thrilling a first-person adventure. We begin among a troupe of Russian soldiers during World War II as they delve deeper from the outskirts of the forest and into a laboratory of mechanical nasties, eventually confronting the mad scientist responsible for their creation. All the while, the camera never skirts from its responsibility as a steadfast explorer.

Dr. Victor Frankenstein’s creativity – and by extension, that of director Richard Raaphorst – is truly something to behold. There’s a huge range of beasts in all shapes and sizes, from a miniature tool pot with legs to a Big-Daddy-esque robot with a fan for its face. So inspired are these designs that trading cards featuring drawings of the monsters became available to viewers if they tweeted the film’s hashtag. And although the monsters are glimpsed, confronted, and rarely bested, they still never seem truly confined to the frame. The film’s resistance to found-footage visual obscurity places higher precedence on exploration; there’s always an inference of a world beyond the frame, an awareness that the world of the film isn’t simply limited to what we see before us.

Far from shake, rattle, and roll away from its intricacies, Frankenstein’s Army takes the time and effort to pore over every aspect of its world. The camera enters a room and scans over meticulously detailed production design, much like the urge for a gamer to scour a room for any hidden items. The found-footage format isn’t relied on here to cut any corners, but inspects those corners with a keen eye, aided by a close ear to any worrying sounds emanating from off-screen. 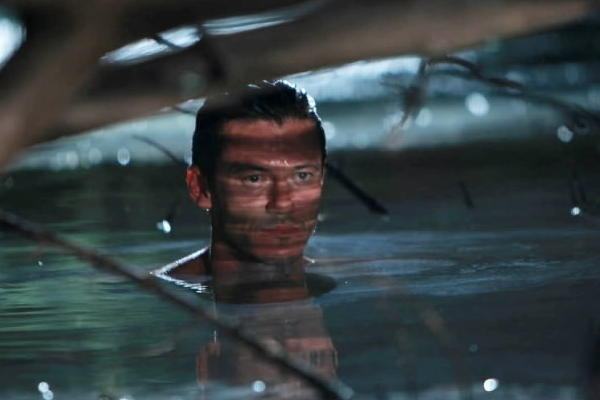 No One Lives
Written by David Cohen
Directed by Ryuhei Kitamura
USA, 2013

The audience laughed nervously upon seeing the WWE Studios logo appear at the start of No One Lives. While the hugely successful wrestling company is adept at telling a unique brand of stories in-ring, its movie arm still has a long way to go in producing something of artistic cinematic merit. From The Marine to The Condemned to See No Evil, the big E has been satisfied with mining the clichés of a particular genre, and relying on a bankable wrestling name in the lead role as a means to market the film around them.

There’s no such marquee attraction in No One Lives. Luke Evans leads the charge as an evil enigma, an angel of death who sets out on a warpath against a family of dysfunctional criminals. The only wrestler to be found on the battleground is Brodus Clay, playing against his jovial ‘Funkasaurus’ type as Ethan, a large, imposing muscle who somehow provides the standout scene of the film long after his demise. Midnight Meat Train director Ryuhei Kitamura lets Evans loose on a rampage of consecutive creative murders against the impure, having him so convinced of his ‘coolness’ and undiscerning attacks that viewers can’t help but root for the man in spite of their struggle to understand his methods.

But the WWE product has made millions from plying this halfway slapstick trade. Week in, week out, the scriptwriters pit overzealous, serious men against one another, whist the audience keeps near enough immersed to enjoy the fabrication and at the same time just distant enough to find it all incredibly amusing. If No One Lives dispenses with a wrestler in its lead role, it still inherits the farcical quality of WWE programming through the emotionless bloodletting from Evans and his pithy one-liners. Psychological mind-games connect a few of the characters and, in a number of flashbacks, threaten to derail the luridness into some sort of unwanted logic; thankfully Kitamura knows just what to prioritise and who or what the audience came to see, even if the WWE logo had them unsure of this themselves. 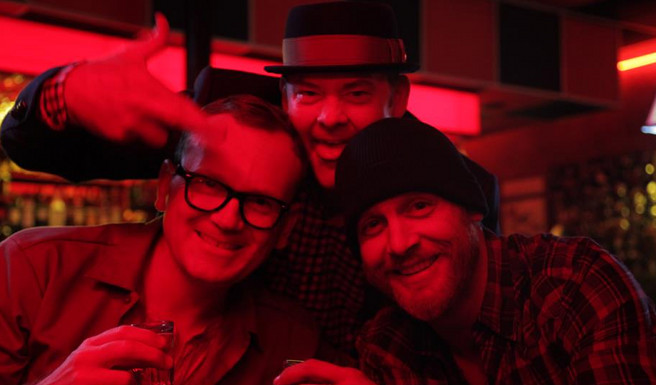 Made on a modest budget of £100,000 and shot in just under 2 weeks, EL Katz’ Cheap Thrills inverts the traditional notion of torture porn as a moral lesson inflicted on the sinner, instead depicting a morally reprehensible individual coaxing a vulnerable man into self-inflicted, nihilistic mutilation. One can easily borrow the director’s admission of a social class allegory and take the film to bluntly translate as “How far would you go to ensure the economic safety of your family?” But such questions form only a small part of the film’s warped vision of an unreachable American Dream; no man is an island, and the rules of dog-eat-dog dictate that, finally, somebody will be eaten to ensure the other’s survival. There’s not enough meat to feed everyone. Katz is interested in where to pinpoint the blame, and how our ingrained anxieties can be manipulated to turn the working class against one another and consequently obscure the real threat to prosperity.

Craig Daniels (Pat Healy) has been laid off from his job at the imperfect time, right when he faces eviction and has a wife and new-born baby to support. Enter the devil: David Koechner plays a subtly demonic force in obscenely wealthy Colin, who invites Craig and old school friend Vince (Ethan Embry) back to his apartment for a game of dares. The first to defecate on a doorstep receives a few grand. The first to cut off their pinky receives a dozen grand. Cheat on your wife for another dozen grand. And so on and so forth, as social anxieties relating to healthcare and faithfulness are exploited in the cruellest ways, beginning as farce and ending as tragedy. Katz doesn’t give us room to breathe; the apartment is undeniably lush and well lit, but the camera never roams or gives us any sense of its geography, choosing to stick itself to the agonised competitors and their tormentor.

The audience lapped up the various means of self-harm, with one particular gentleman shouting “Yeah, baby” at the culmination of each humiliation. As much as we would decry the ritual embarrassment of a working-class citizen by a sociopathic millionaire, we nevertheless have no problem in egging it on. Our point of sympathy is therefore not with Craig, but with games-master Colin. His sadistic voyeurism is ours to share, and that can be an uncomfortable thing to realise. So focused are we on reading the text as an indictment of its characters’ cruel treatment that we discount our own complicity. Aware of this point, one of the festival organisers referred to Katz’ film as resembling a Michael Haneke film, though it’s hard to see the similarities. Katz’s film is nowhere near as cold and clinical as, say, Funny Games, nor does it openly wag its finger at the audience. It pointedly refuses to have us aware of who we unwittingly side with in the grand scheme of the narrative – that’s something with which we’re left to come to terms. 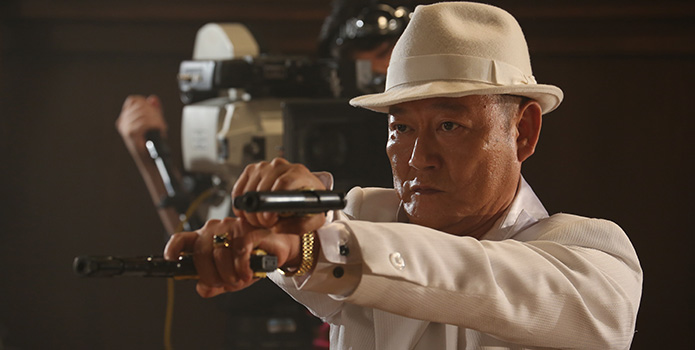 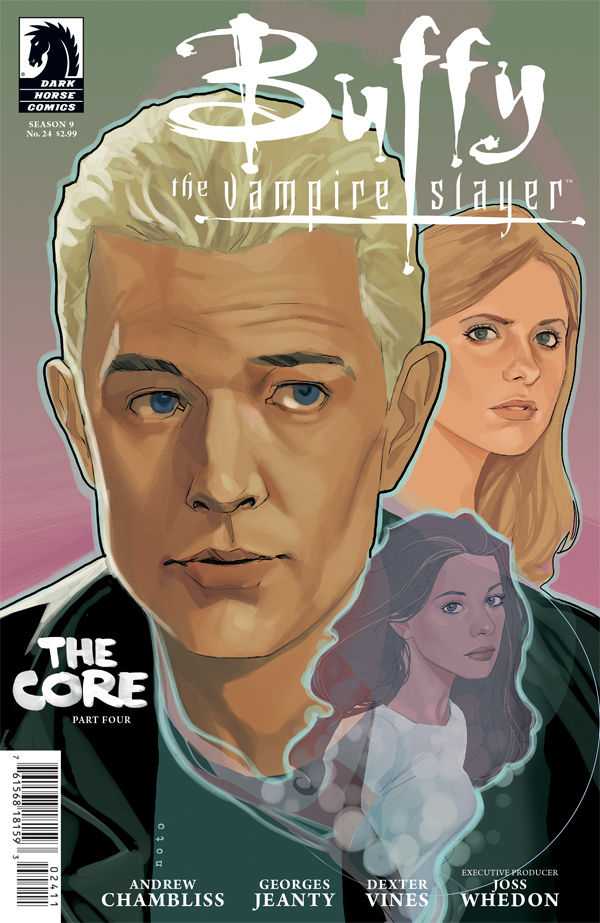