Warner Bros. has released the first promo image of Anne Hathaway as Catwoman in The Dark Knight Rises, the next instalment in the Batman franchise. It isn’t much to get excited about and it is still unsure how big of a role she will play in the film. Hathaway hasn’t revealed much about her role (“I signed a blood oath,” she says), but knowing the internet, we should be seeing more and more images popping up soon.

Catwoman was first played by actress Julie Newmar in the 1966 Batman TV series; Eartha Kitt took over the role in the show’s third season; Michelle Pfeiffer put on the tights in 1992’s Batman Returns and Halle Berry starred in the 2004 Catwoman. 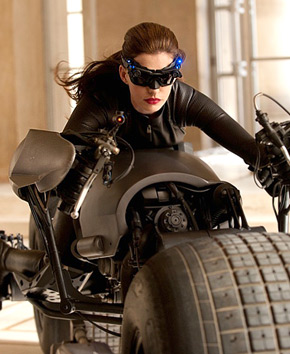