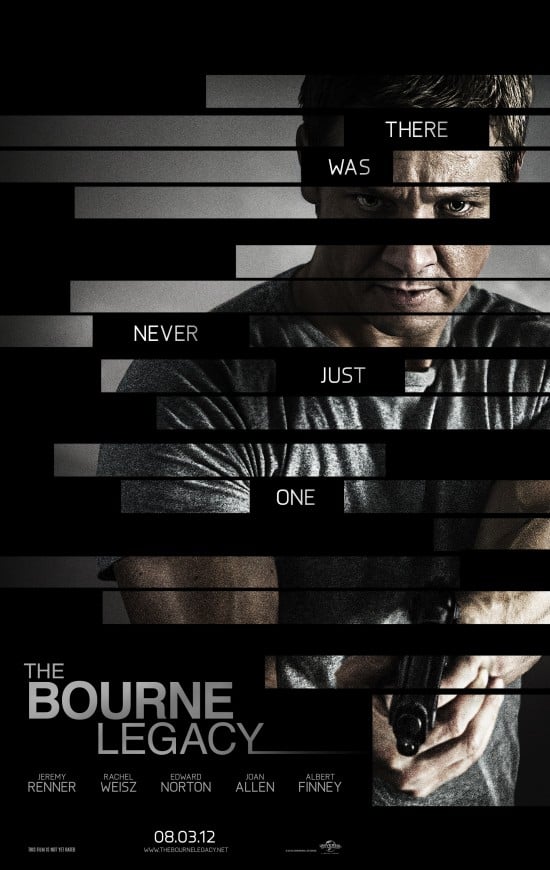 The first trailer and poster for the fourth entry in the eponymous Bourne film series, have gone online. Based on the Jason Bourne novels by Robert Ludlum and Eric Van Lustbader, the story sets off after the conclusion of The Bourne Ultimatum and will be directed by Tony Gilroy, the screenwriter of the first three films. This picture features Jeremy Renner as a Jason Bourne-like agent and also stars Rachel Weisz, Edward Norton, Stacy Keach, Oscar Isaac, Albert Finney, Joan Allen, David Strathairn, and Scott Glenn. The Bourne Legacy opens August 3rd.

Click over to Apple to see the trailer in HD.

The narrative architect behind the Bourne film series, Tony Gilroy, takes the helm in the next chapter of the hugely popular espionage franchise that has earned almost $1 billion at the global box office: The Bourne Legacy. The writer/director expands the Bourne universe created by Robert Ludlum with an original story that introduces us to a new hero (Jeremy Renner) whose life-or-death stakes have been triggered by the events of the first three films.