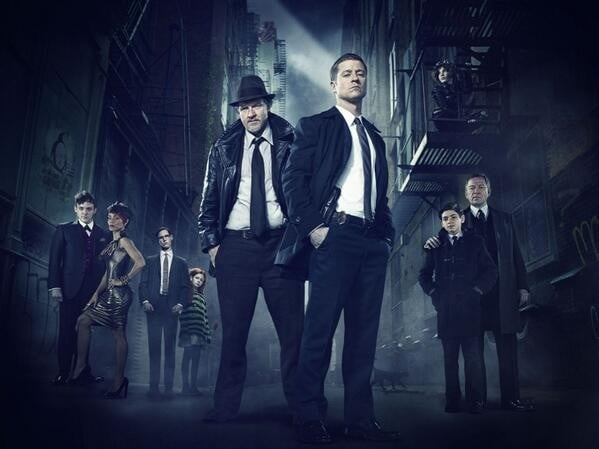 Check out the trailers for all of Fox’s newly-announced series, from the comic-book inspired Gotham to the new reality series Utopia.

Gracepoint. A remake of the British series Broadchurch, and again starring David Tennant, this event series tracks two detectives trying to solve the murder of a small boy, and the repercussions that reverberate through the town. Anna Gunn, Nick Nolte, Jacki Weaver, Michael Peña, Jessica Lucas and Sarah-Jane Potts.

Empire. Empire is a powerful new drama about the head of a music empire (Terrence Howard) whose three sons and ex-wife all battle for his throne. Set to an original soundtrack written and produced by Timbaland.

The Last Man on Earth. Comedian Will Forte of Saturday Night Live created and stars in this new single-camera comedy about the life and adventures of the last man on earth. The year is 2022, and after an unlikely event, only one man is left on earth: Phil Miller (Forte), who used to be just an average guy who loved his family and hated his job at the bank. Now, in his RV, Phil searches the country for other survivors.

Wayward Pines
This 1o-episode event thriller is based on the best-selling novel  by Blake Crouch and brought to life by M. Night Shyamalan. Secret Service Agent Ethan Burke (Matt Dillon) drives to the bucolic town of Wayward Pines, ID, searching for two missing federal agents. One of the best Secret Service agents in the Seattle office, he’s the man who knew missing agent Kate Hewson (Carla Gugino) better than anyone.

Backstrom. From Hart Hansen, creator of Bones, comes this comedic crime procedural centering on an unhealthy, offensive, irascible — albeit brilliant — detective (Rainn Wilson). After a five-year banishment to the traffic division for offensive behavior, he has returned from disgrace to lead Portland’s newly minted S.C.U.

Mulaney. From Emmy Award-winning writer and comedian John Mulaney comes a multi-camera ensemble comedy series about a rising stand-up comic trying to take his career to the next level and the friends and mentors who lift him up, hold him back and push him around. John Mulaney is a 29-year-old comedian working the stand-up circuit and looking for his big break. But life drastically changes when self-centered comedy legend and game show host Lou Cannon (Emmy Award winner Martin Short) hires Mulaney as a writer.

Hieroglyph
Politics, backstabbing, royals and thieves, in ancient Egypt. When a dangerous scroll, The Book of Thresholds, is stolen from Egypt’s most secure vault, master thief Ambrose (Max Brown of Beauty and the Beast) is plucked from prison to track down the perpetrator.

Utopia
Based on the Dutch hit of the same name, Utopia is a bold new series that moves 15 everyday Americans to an isolated, undeveloped location — for an entire year — and challenges them to create their own civilization. Will it be ultimate happiness or utter chaos?