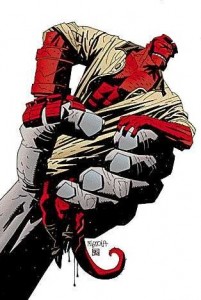 Created by writer-artist Mike Mignola, the character of Hellboy first appeared in a number of eponymous miniseries, one-shots as well as some crossovers. The demon, whose true name is Anung Un Rama (the Beast of the Apocalypse), was brought to Earth as an infant by Nazi occultists. He was later discovered by the Allied Forces who formed the United States Bureau for Paranormal Research and Defense (BPRD) who raised him up to become the “World’s Greatest Paranormal Investigator.”

You don’t have to be a comic book geek to appreciate the hard work and craftsmanship gone into bringing Hellboy from the pages to the big screen. Superhero movies are a dime a dozen these days, but few are quite like the Hellboy, an adaptation faithful to its pulp roots and a hellacious good time. Del Toro moves his story along with unrelenting energy, awesome computer-generated and make-up effects, Sly humour, and a terrific and very crimson performance by Ron Perlman, who is perfectly cast. Very few writers in the comic book industry have been able to transcend societal opinions and presumptions of the medium in the way Alan Moore has. V for Vendetta remains as relevant now, as it was at the time it was created and the themes that underpin the storyline hold significance globally in the same way George Orwell’s 1984 does. The message of V for Vendetta is strong and clear, it doesn’t matter who the individual is, only the ideas they represent. Reading V for Vendetta is like peeling back the layers of an onion.

V blends political allegory, violent action set pieces, and stunning cinematic majesty into a solid piece of pure entertainment. V is relentless in its pacing, rarely letting things droop, and loaded with rich images, deep shadows, and strong iconography that has the power to arrest the viewer’s attention. Vendetta is stuffed with memorable moments: the destruction of the Old Bailey, V”s introductory monologue, the toppling of a massive number of dominoes and the final, blood-soaked battle. While the co-creator of the source material, Alan Moore, has distanced himself from the cinematic version, V for Vendetta still works on its own terms – vicious, vibrant, vigorous and very good. No comic book has been the subject of more essays and serious literary discussion than Alan Moore and Dave Gibbons’ Watchmen. It has been named one of the 100 greatest novels of the past century by Time Magazine. The twelve-issue comic book limited series is as sophisticated as any great novel. Gibbons’ art echoes Moore’s paranoid mood perfectly and the story is stuffed with symbolism, subtext and intelligent social and political commentary. Watchmen opened the doors for thought-provoking and intelligent comics in the mainstream. Decades after its release, Watchmen is still the most critically acclaimed graphic novel of all time.

Gritty and visually striking, Watchmen is a faithful adaptation of Alan Moore’s graphic novel, but perhaps too faithful. When adapting a graphic novel to the big screen, changes need to be made. Film is a different medium and Zack Snyder delivers panel-by-panel fetishism. Still after the those 2 hours and 40-odd minutes, you can still say, the filmmakers did what no team before could manage to do: They got the movie made – and it wasn’t that bad. Batman first appeared in Detective Comics #27, originally referred to as “the Bat-Man”. With time he also became know as “the Caped Crusader,” “the Dark Knight” and “the World’s Greatest Detective.” Along with Action Comics, Detective Comics is one of the medium’s signature series; with 866 monthly issues (as of June 2010), it’s the longest continuously published comic book in the United States.

Like many comic to-movie adaptations, Batman is an origin story, only the focus here isn’t that of the title character, but of the The Joker. In a way this approach is a flaw, since Batman’s character is overshadowed, but with time, it’s somewhat of a refreshing change. Jack Nicholson as the Joker, of course, stole the show through his sheer maniacal intensity and an outrageous marketing campaign. But the two men who were really responsible for making Batman a success were Tim Burton and Anton Furst. Director Tim Burton’s eerie, haunting spectacle, effectively echoes the visual style of the original Bob Kane comics while tweaking the story in ways closer to the spirit of the 1980s graphic novels written by Frank Miller. Meanwhile Prodcution designer Anton Furst (Full Metal Jacket) created one of the most unique architectural cinematic wonders of all time. A dark, brooding, oppressive and beautiful vision that places the film’s worldbuilding as one of the all time greats, along side Blade Runner and Metropolis. Their brilliant visual interpretation of the dark, ominous comic book is what people should remember most. Batman proved to be so popular that DC felt he need a second series. One month after the first appearance of his new sidekick, Robin, the Boy Wonder, a self-titled ongoing comic book series began publication in the spring of 1940 titled simply Batman. Though the Batman comic book was initially launched as a quarterly publication, it later became a bi-monthly series through the late 1950s, after which it became a monthly publication and has remained so since.

Fleshing out the world of the Caped Crusader with a better story and more fully-realized villains, Batman Returns allowed Tim Burton to better explore the psychological and sexual subtexts of The Dark Knight. The result was a better and more sophisticated and exciting assault on the senses that outshines the first outing.