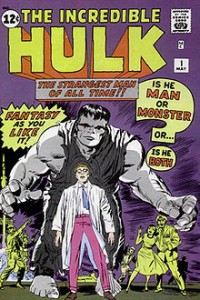 The Hulk first appeared in The Incredible Hulk #1 (May 1962), written by writer-editor Stan Lee, and penciller and co-plotter Jack Kirby, and inked by Paul Reinman.  Lee cites influence from Frankenstein and Dr. Jekyll and Mr. Hyde in the Hulk’s creation:

I combined Jekyll and Hyde with Frankenstein,” he explains, “and I got myself the monster I wanted, who was really good, but nobody knew it. He was also somebody who could change from a normal man into a monster, and so, a legend was born.” Lee remembers, “I had always loved the old movie Frankenstein. And it seemed to me that the monster, played by Boris Karloff, wasn’t really a bad guy. He was the good guy. He didn’t want to hurt anybody. It’s just those idiots with torches kept running up and down the mountains, chasing him and getting him angry. And I thought, ‘Wouldn’t it be fun to create a monster and make him the good guy?’

The Incredible Hulk may not be the smartest comic book movie ever made, but it finds viable ways to retell an old Jekyll and Hyde story while capturing the spirit of its protagonist. Unlike Ang Lee’s version, The Incredible Hulk delivers a worthy bad guy in The Abomination, boasts some exciting action set pieces and pays homage in many ways to the popular late-’70s/early-’80s TV show of the same name. One of the best and most popular Superman stories ever told is Superman: Red Son. Red Son is a three-issue prestige format comic book mini-series by author Mark Millar. The premise “what if Superman had been raised in the Soviet Union?” received critical acclaim and was nominated for the 2004 Eisner Award for best limited series.

The story mixes alternate versions of DC super-heroes with alternate-reality versions of real political figures such as Joseph Stalin and John F. Kennedy. The series spans approximately 1953-2001, save for a futuristic epilogue. In Red Son, Superman’s rocket ship lands on a Ukrainian collective farm rather than in Kansas. Instead of fighting for “…truth, justice, and the American Way”, Superman is described in Soviet radio broadcasts “…as the Champion of the common worker who fights a never-ending battle for Stalin, socialism, and the international expansion of the Warsaw Pact.” His “secret identity”  is a state secret.

Bryan Singer reconfigures the most famous comic-book saga into a beautifully crafted, emotionally resonant and heavily nostalgic film, guaranteed to appeal to several generations of Superman fans. Singer honors the myth and finds a fresh way to dramatize it as Superman embarks on an epic journey of redemption. The best Hollywood movies always know how to include an engrossing subtext into a crowd-pleasing story and Superman Returns is no exception. Based on a popular manga about a notebook that allows an idealistic law student to kill people simply by writing their names in its pages. As of June 2006, Death Note had sold around twenty million copies in Japan. On December 31, 2008, Comipress reported that the twelve volumes from the series had sold 26,500,000 copies. It was also nominated for Best Manga at the 2006 American Anime Awards.

Fiendishly original, this offbeat genre peice grows darker and more complex, leading to an emotionally ambiguous ending and leaving the door wide for the inevitable sequels to come. Directed by Shusuke Kaneko (Gamera) Death Note is less a scare-machine than an entertaining thriller. Persepolis details a young girl’s life during the war between Iran and Iraq. Drawn in black and white, the graphic novel found great popularity following its release, and was translated into several languages. The English edition which combines the first two French books  is sometimes funny and sometimes sad but always sincere and revealing.

Persepolis is a superb film about a young girl’s coming of age amidst war, fascism and family tragedy.

This sturdily poetic movie is an eye-opener to those who know little about Iran. The film’s nuanced view of social issues is complemented by lovely black-and-white animation in a world where nothing ever is.

This heartbreaking portrait of a life and a nation in crisis is epic, deeply moving and not to be missed. Fritz the Cat became one of the most familiar features on the underground comix scene and Crumb’s most famous creation. These stories served as the basis for a pair of film adaptations produced by Steve Krantz, Fritz the Cat 1972, directed by Ralph Bakshi, and The Nine Lives of Fritz the Cat 1974, directed by Robert Taylor. The first film went on to become a worldwide hit, grossing over $100 million (USD) and was the most successful independent animated feature ever helping extend Crumb’s reputation beyond the underground comix scene.

Ralph Bakshi, already a veteran of the Terrytoons animation studio teamed up with producer Steve Krantz and raised almost $1 million for Fritz the Cat, an amusing but always provocative satire of ’60s counterculture and anti-establishment sentiments. With an excellent vocal characterization by Skip Hinnant and excellent animation, Fritz The Cat will forever bear the distinction of being the first “X-rated animated movie.”