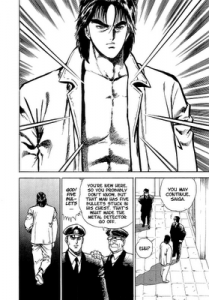 Riki-Oh is a manga which later adapted to an anime series and live-action film. Created by Masahiko Takajo and Saruwatari Tetsuya, the story is about a young man who has learned the art of Qigong from one of Chiang Kai Shek’s bodyguards and has become so strong that he can literally punch holes through people and solid objects. It was serialized in Business Jump from 1983 to 1990 and later published in 12 volumes. Much like the film, the manga and anime contain gruesome violence. American Splendor is a series of autobiographical comic books written by the late Harvey Pekar and drawn by a variety of artists. The first issue was published in 1976 and the most recent in September 2008, with publication occurring at irregular intervals.

American Splendor is the mark of a genius who can see what’s extraordinary in the ordinary. That’s Harvey Pekar’s gift. While he may seem morbid or depressing to some, the way he renders the little moments in life is truly inspiring. Harvey Pekar may be an average guy, but he has the sort of cynical grace that sucks you in. A remarkably fresh and exciting story that’s essentially about a fortysomething curmudgeon.

A hilarious, moody, quirky, off-kilter look at the life and work of cult-comics author Harvey Pekar.

American Splendor is no masterpiece, but it manages to capture the feel of the comic book without letting the offbeat collage of animation, dramatization, documentation and breaking of the proverbial “4th Wall” overpower the rest of the film. In the world of comic-book movies, American Splendor is the real deal and one of the best cinematic depictions of an artist and his work that I ever recall seeing In 1962, after the immense success of the Fantastic Four and the Incredible Hulk,Marvel Comics’ head-writer and chief editor Stan Lee proposed the idea of a new super-hero called Spiderman. He said that the idea for Spider-Man arose from a surge in teenage demand for comic books, and the desire to create a character with whom teens could identify.

Sam Raimi once again raised the bar for superhero films and summer blockbusters with Spiderman 2 – one of those rare sequels that’s better than the original in every way – in story, in setting, in special effects, in high-energy action and in its surprising depth of emotion. It’s the human drama that makes it all work. The characters are extremely well developed, the production values exceed those of the earlier film; the costumes, cinematography and CG effects are outstanding and more importantly, Spiderman 2 delivers one of the most memorable villains in cinematic history: Alfred Molina’s Doc Ock. A History of Violence is a graphic novel written by John Wagner (best known for his massive writing contributions to 2000 A.D.’s Judge Dredd comics) and illustrated by Vince Locke, originally published in 1997 by Paradox Press and later by Vertigo, both imprints of DC Comics. The story itself, follows the downward spiral into a criminal world that small-town diner proprietor Tom McKenna thought he’d left behind long ago, and the lengths he’ll go to in order to preserve the safety of his family once his past starts catching up with him. Created by writer Stan Lee and artist Jack Kirby, the basic concept of the X-Men is that under a cloud of increasing anti-mutant sentiment, Professor Xavier created a haven at his Westchester mansion to train young mutants to use their powers for the benefit of humanity, and to prove mutants can be heroes. The comic focused on a common human theme of good versus evil and later included storylines and themes about prejudice and racism, all of which have persisted throughout the series in one form or another.