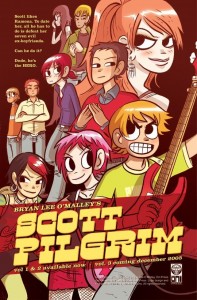 Creator Bryan Lee O’Malley was inspired to create the series and eponymous character of Scott Pilgrim after listening to Canadian band Plumtree’s 1998 single “Scott Pilgrim”, a song then-Plumtree singer Carla Gillis describes as “positive, but…also bitter sweet.” In particular, O’Malley was inspired by the lyric, “I’ve liked you for a thousand years”. The graphic novel consists of six digest size black-and-white volumes, released between August 2004 and July 2010, by Portland-based independent comic book publisher Oni Press. The series is about 23-year-old Canadian Scott Pilgrim, a slacker and part-time musician who lives in Toronto and plays bass guitar in the band Sex Bob-omb. He falls in love with American delivery girl Ramona Flowers, but must defeat her seven evil exes in order to date her. Published under Marvel’s Icon imprint, Kick-Ass reunites Mark Millar with his Enemy of the State partner and Marvel artist mainstay John Romita Jr. (World War Hulk, Amazing Spider-Man), and once again finds Millar poking fun at the sort of comic book conventions he did with Wanted. It is the story of Dave Lizewski, a teenager who sets out to become a real life superhero. His actions are publicized on the Internet and inspires others. He gets caught up with ruthless vigilantes Hit-Girl and Big Daddy who are on a mission to take down the gangster John Genovese. Superman is known not only as an American cultural icon but is also regarded as the first comic book superhero. His adventures and popularity have established the character as an inspiring force within the public eye, serving as inspiration for musicians, comedians and writers alike.

Unlike most superhero movies, Superman pays homage to the legend’s mythology without losing sight of the character’s essential humanity. Developed by Godfather scribe Mario Puzo, Superman was never designed as a one-off movie but Puzo had actually laid out the story so it could it span two films allowing all the plot lines left unresolved to conclude in the sequel. In fact most of Superman II was shot at the same time as the original. Richard Donner who was more of the Christopher Nolan school of superhero movies was always two steps ahead of everyone else and already mapped out the direction of the franchise. Donner, who directed the first instalment, was initially set to direct the sequel until “creative differences” with producer Alexander Salkind led to his ouster and replacement by Richard Lester. Regardless Superman remains the first and best of the “Man Of Steel” films for a number of reasons. The decision to go with an unknown actor in the title role was greeted with skepticism but Christopher Reeve was perfectly cast, crafting a loving, nostalgic tribute to an American pop culture icon. The same cannot be said for Marlon Brando’s 15 minutes of shame and the four million they paid out for his cameo. Thankfully Gene Hackman creates a charming and amusing villain in Lex Luthor

exuding ten times the amount of charm of Brando. Arguably though, the most memorable aspect of the film outside of Christopher Reeve’s portrayal is John William’s swashbuckling score which completes the grand experience. Unlike most comic book films, Superman ages like good wine. It is impossible not to root for Superman in this most enjoyable of feel-good movies. Old Boy is an intense, bare-knuckled urban thriller in the tradition of Pulp Fiction and Payback and is the manga that inspired the critically acclaimed 2003 film. In 2005, Dark Horse Comics bought the rights to make an English translation of the book for its customers worldwide. Volume 1 of this new translated series was released on July 5, 2006. The manga is composed of a total of eight volumes. In May 1939, DC Comics introduced “The Bat-Man,” as the caped crusader was originally called. The preeminent Bob Kane designed the stunning color cover, featuring Batman swooping in on a rope high atop Gotham City to stop a criminal in the act. Detective Comics #27 introduced the crime-fighting superhero to the world in and now that very rare, prized issue currently holds the honor as the world’s most valuable Batman comic book, and can be sold for a staggering $1,075,500!

The Dark Knight is a masterpiece of the first order, a film that rockets the Batman legacy to heights never imagined. Fueled by Heath Ledger’s amazing re-invention of The Joker, his riveting performacne had us all mourning his loss. While the movie plays with the same themes as a lot of other superhero movies (the symbiosis of good and evil is the film’s philosophical core), it’s also a film steeped in tragedy, sacrifice, and heroism, and is the darkest and most clever of all of the superhero movies ever made. It is a supreme achievement in its genre, a film that doesn’t transcend its comic book origins, but rather faithfully represents them. The movie is relentlessly paced, as Nolan constantly pushes the film with nail-biting action sequences (including a somersaulting truck). It boasts a top notch script, marvelous performances and succeeds as an action film, a character study and a metaphor for our own terrorism-obsessed time.