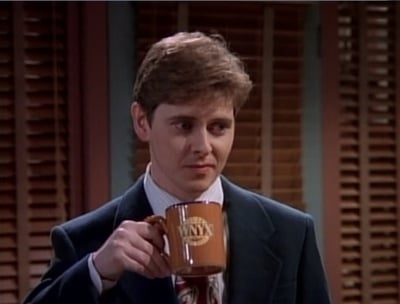 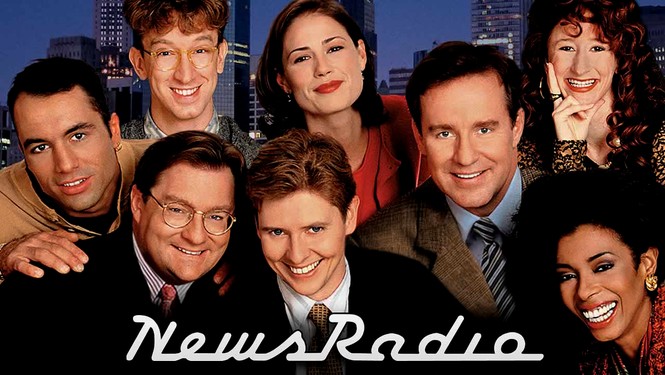 As far as sitcoms go, Newsradio is a diamond in the rough.  Despite a not-so-unique workplace setting, the show successfully combines wit and physical comedy, without ever feeling dull or predictable.  It has the kind of quick, self-sustaining energy that we love about sitcoms, and it all began with the pilot episode.  Of course, every series begins with a pilot, but with Newsradio, the first episode never feels forced or stiff in the way many others have.  Often times, sitcoms struggle with comedic timing in their first few outings.  Featuring a veteran cast, boasting a strong background in comedy (Dave Foley, Kids in the Hall; Phil Hartman, Saturday Night Live; Andy Dick, The Ben Stiller Show), Newsradio hits its stride right from the get-go.

The episode opens with Dave (Dave Foley) arriving at WNYX, a fictional news radio station in New York City.  After informing the lobby security guard he doesn’t want to head upstairs until exactly 3 minutes before 9:00, he finally enters the elevator, only to be told he is at the wrong building.  In a mad scramble, Dave then hightails it out the door; the security guard’s parting words—‘Welcome to New York’—setting the stage for what we believe is a typical, fish-out-of-water, boy-in-the-big-city comedy.

Newsradio is so much more than that.  Even though Dave seems unassuming, he is actually quite competent and only looks like a pushover.  In fact, he fits in perfectly with everyone else at the station, and this is what makes the show work.  None of the characters are one-note.  All of them embody differing comedic functions, yet despite the absurdity that surrounds them, they all seem to know their role.  In other words, they actually make the radio station appear somewhat functional.  The energy of WNYX is chaotic, but it is also calculated, and so is the comedic energy of the show.

Take Mr. James (Stephen Root) for example.  He is the ‘so rich I have no idea what to do with my money’ kind of owner, who pretends not to care about the station, yet obviously does.  We meet Mr. James when Dave arrives 15 minutes late, and right away his dry humour is put on display.  We also learn that Mr. James has yet to fire Ed (Kurt Fuller), the man Dave will be replacing, and the arc of the episode revolves around Dave trying to find the best way to break the news.  If at first it seems Mr. James is merely handing off a task he doesn’t want to handle himself, it later becomes obvious that he has given Dave an opportunity to see how the office functions, and to gain the respect of the staff.

The intimate setting of the office contributes to the chaos of the environment, while also allowing Dave to see how impossible it is to gain complete control. In order to lead the group, he has to become one of them; they have to trust his competence and respect him as a person. What ensues is a series of gags meant to show how hectic the space is.  Every conversation is either interrupted or accompanied by work, and the station’s lack of privacy is constantly re-enforced.

A large majority of the physical comedy also comes from the intimacy of the space.  Dave’s office becomes a site where important conversations are meant to occur, but as soon as the door closes, a listening ear is not far off.  This allows the show to use off-screen space effectively in creating a light-hearted atmosphere of eavesdropping and gossip.  On occasion the office will, however, function as a site of seriousness, with a change of perspective letting the viewer know when these moments are occurring.

For example, throughout the series—starting as early as the next episode—there are many instances where personal matters will be addressed in Dave’s office, and as viewers, our perspective will be with Dave.  This means we’re in the office, waiting for someone to burst in and interrupt, or overhear a juicy secret.  The pilot episode plays it differently.  When Dave takes Ed into the office to fire him, we’re aligned with the other characters outside the door.

The sequence is quick and efficient, and it is also a bit surprising, considering the entire episode has been built around Dave’s apprehension. We’ve been expecting an exaggerated drawn out speech, where Dave fumbles and awkwardly breaks the bad news, yet he handles it with expertise.  The moment, even though we don’t see it, is effective and refreshing, and sets the stage for the kind of unpredictability the show will become known for.

The pilot has a few hiccups, though.  The biggest among them is the presence of the electrician character (Greg Lee), who is underused and miscast –  an aspect the studio seems to have noticed as well, as he’s replaced by Joe Rogan in the next episode.  In the scene where Lisa is upset, he makes a joke, asking her if she is about to cry.  The moment is awkward and devoid of comedy because the delivery is off.  When Rogan takes over the role, his boyish over-the-top manner is much better suited for the working-class directness of the electrician character.  The appearance of Catherine (Khandi Alexander) in the next episode also adds another layer to the show, as her cold sarcasm contrasts nicely with Bill’s (Phil Hartman) smugness.

All-in-all, Newsradio never received the acclaim it deserves.  Featuring an all-star cast, the pilot and the entire series still manages to feel fresh.  The laughs are constant, and the writing is stronger than most contemporary sitcoms.