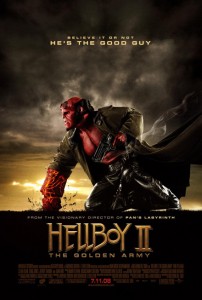 I must admit right off the bat that I’m disappointed by the crop of superhero movies I’ve seen this summer. Originally, I wanted to see all six of them but that soon changed once I saw Iron Man. It left me severely unsatisfied while The Incredible Hulk just barely fed my cravings for ultra-violence. What else awaited me? Hancock and Wanted. I didn’t need to see those, thank you, and I crossed my fingers for a Hellboy sequel that would knock my dirty socks off.

My socks were on quite tightly in anticipation of seeing Bid Red once again. I knew it would take something special to impress me, as sequels don’t usually make it into my favorite DVDs, yet I reserved a special kind of hope for this one, having enjoyed the first Hellboy back in 2004. What bothered me most this time around is the fact that we, the viewers, are repeatedly patronized by the movie studios. Each sequel gives us the same treatment: develop the love story, make it seem like the main character will die by the end of the movie and throw in a couple lame gags for the lower-IQ crowd. Some of us have actually seen a lot of movies and we’re fed up with this generic garbage! But hey, if it’s a success at the box office, why stop there? Let’s make 8 of them!

Ok, that was a little harsh. The story wasn’t that bad, keeping in mind that most comic book adaptations are a lot worse (Superman 3 anyone?). We’re subjected to the developments between Liz and Hellboy, and although it holds no significant importance to the grandeur of the movie, it does provide a few chuckles, as well as a juicy hint about another sequel.

The real reason we paid $12 to see this movie is to witness Hellboy destroy everything in sight, either with his gargantuan fist or his weapons. The real highlight in this movie, however, is the attention to detail. Guillermo Del Toro paints his prettiest canvas yet by creating the most visually stunning movie since Pan’s Labyrinth. The screen oozes with color and grandiosity, bringing us tantalizingly close to the myriad of characters Hellboy meets. The scene where he ventures into the troll market remains particularly vibrant in my mind. I was easily glued to the screen the entire time, trying to register every little detail that was projected back to me. Del Toro’s gutsy approach to filming and cinematography is one that more directors should employ.

So the entire premise is rather clichéd. Nothing here that hasn’t been told before. Yet by using the best visual elements from Pan’s Labyrinth, Del Toro stays true to the genre and entertains us to the end with an eclectic cast and creative action sequences. The success of the franchise will undoubtedly produce a third movie but a warning to anyone who hasn’t seen this yet: don’t expect the unexpected. Go in with a fresh mind, without expectations and you should thoroughly enjoy yourself.