When you look back in recent years, science fiction movies have dominated the box office while receiving mostly positive reviews from critics world wide. Just a few examples that spring to mind are  Avatar, The Lord of the Rings trilogy, Inception, Jurassic Park, the Star Wars trilogy, Terminator 2, and E.T. :The Extra-Terrestrial topping the list of the most popular and successful movies ever made. Science fiction has been the golden ticket for the movie business for most of the twentieth century.

2011 is going to be another good year for sci-fi films with such releases as Source Code, Paul, Super 8, and Captain America to name a few.  With that said I thought it would be fun to post this image created as an entry to a science mapping exhibit at Indiana University. The infographic displays a visual representation of the history of science fiction, starting from its most basic and tracing it through the history of science and art. The infographic doesn’t just include films either, inside you will also see mentions of books as well as television programs.

click on the photo to enlarge and after which I recommend you zoom in. 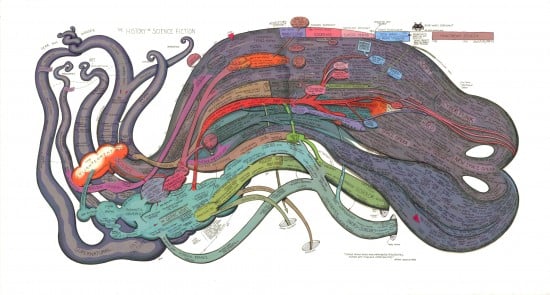