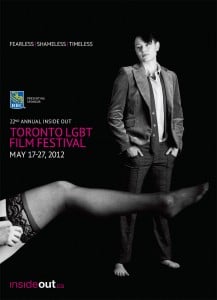 After ten days of film, I have compiled a list of the ten best at this year’s Toronto LGBT film festival. Every bit as fearless, shameless, and timeless as the adverts suggest, Inside Out 2012 was an unmitigated success.

Although the film initially struggles to find its objet d’art, it eventually concentrates on Schemel’s inherently engrossing story. With amazingly detailed file footage of Schemel’s personal and professional life, and a strangely hallucinogenic aesthetic, Hit So Hard is a powerful and personal documentary about a woman who’s unquestionably likewise.

With so much heart tugging and fifty different kinds of cheese, Melting Away eventually succeeds in its war of emotional attrition. We know exactly how the film is going to play out, and how Anna’s story will come to an end, but despite this, there’s still an inexplicable urge to cheer for her.

Jamie and Jessie Are Not Together

The film avoids falling into genre tropes, especially regarding its characters, and with an abundance of heart and genteel authenticity, Jamie and Jessie Are Not Together is a romantic comedy that never forces its hand, but, instead, gently guides its narrative to a sweet, refreshing conclusion.

The most deeply affecting aspect of the film is its incredibly detailed portrait of Chely Wright. Using personal material and candid, fly-on-the-wall footage, the film allows her to expound and emote with vociferous passion. Because it’s so heartbreaking and piteous, Wish Me Away unquestionably makes us care for her, and at the end of it all, you don’t have to be a fan of her music to be a fan of Ms.Wright.

Charming, quaint, and deceptively funny, North Sea, Texas is a gay coming-of-age story that’s appropriately queer. As a whole, the film never truly coalesces, but as different parts, North Sea, Texas incessantly arouses ones curiosity. Watching Pim and his counterparts doing perplexing things (note the shoebox of romantic mementos) is enjoyable in and of itself, with the small coming-of-age story, however lackluster, adding a quirky dimension.

Whereas films like The Help use domestics as a device to elucidate issues of race, class, and gender, Margarita is a more focused effort, choosing to highlight their often overlooked parental duties. With grounded and sardonic performances, especially by McKenna and Correia-Damude, and a perfect pH balance of drama and humour, Margarita resonates far beyond the small confines of a single household.

Shot with stark, glacial beauty, and infused with themes of unimaginable loss and redemption, The Mountain will undoubtedly evoke comparisons to Atom Egoyan’s The Sweet Hereafter. The look of the film often matches its feel, which is to say, wondrous in scope and execution. Full of emotion, angst, and reticence, Ole Giæver’s The Mountain is a spellbinding meditation about love and loss redeemed.

Troncoso and Pineda should receive top marks for their moving performances, but one can’t help but feel that Guerrero must’ve had a heavy hand in their success. From start to finish, she is able to conduce a sense of realism into the story. Benevolent, sweet, and with devastating heart, Guerrero’s Mosquita Y Mari is an essay on young love that unquestionably makes the grade.

The crime thriller is often subservient to the one-man show, and at times, it almost becomes unnecessary. Despite this, the film still succeeds in large part to Schoenaerts’ brilliantly tortured performance, making Bullhead a picture worth talking about. Like an archetypal Martin Scorsese film, Bullhead is a study of unlikeable and fatally flawed characters. But with ample amount of grace and dexterity, Roskam turns our disgust into intrigue, making us understand, if not care for, the film’s schismatic protagonist.

5. My Brother the Devil

Visceral, poignant and brutally honest, My Brother the Devil exhibits a truly rich and authentic look at inner city turmoil. With a breathtakingly gritty aesthetic, appositely restrained acting, and intensely personal cinematography, the film brings the viewer into a world full of unrelenting tension, struggle, and desperation. Essentially, the film is a remarkable mixture of The Kid With A Bike and Attack the Block (minus the aliens).

At times, the film can be sanctimonious and heavy-handed in its storytelling, but considering the insular context of its intended audience, this is more than forgivable. At its core, the film is a heart-rending study of friendship amongst discrimination. With acting of fierce and resolute power, and a narrative of touching, yet assertive, impression, Facing Mirrors is a picture that solidifies Iran as a cinematic powerhouse.

What Hermanus irrefutably does, in Beauty, is make a picture of uncompromising dark complexion. The film never gets easier to stomach as it goes along, but, conversely, it always becomes more engrossing. We don’t yearn to like François as much as we do to understand him, with his ultimate fate amounting to searing curiosity. To simply call Beauty a character study is a ridiculous over-simplification. The film is more like a psychological profile of a mentalist.

With an aesthetic that’s simultaneously beautiful and disturbing, and with a tone of audacious cheek (notice the tumbleweeds), Lisa Aschan’s She Monkeys is an evocative film that is as challenging as it is rewarding – a perfect example of the whole being greater than the sum of its parts. Although it isn’t nearly as groundbreaking as its influential predecessors, it nevertheless straddles the precarious equilibrium of genius and insanity.

With gorgeously regal cinematography and unequivocally captivating performances, beauty is deeply embedded into Alexandra-Therese Keining’s Kiss Me, a classic tale of love destined to become a classic of its own. With plentitudes of technical and creative achievements to spare, Kiss Me is an undeniably sexy film that succeeds on so many levels. Fernandez’s disquiet self-torment is morbidly fascinating to watch, and as her inner turmoil reaches its pinnacle, the following catharsis is overwhelmingly irresistible.

For full reviews and other films at Inside Out 2012, click here