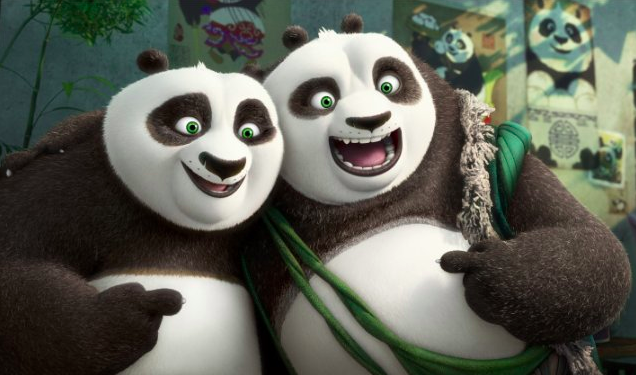 Everyone’s favorite panda Po is back for the third film in the Kung Fu Panda franchise. The first trailer for Kung Fu Panda 3 was released today by DreamWorks Animation and showcases Jack Black as the voice of the lovable panda and Bryan Cranston as his father. The actors are also joined by Gary Oldman, Angelina Jolie, Rebel Wilson, Jackie Chan, Seth Rogen, Dustin Hoffman, David Cross, Mads Mikkelsen, Lucy Liu, James Hong, Michelle Yeoh, and Danny McBride. Jennifer Yuh (Kung Fu Panda 2) directs this one along with Alessandro Carloni and is written by Jonathan Aibel and Glenn Burger, who both wrote the previous two. Here’s the synopsis:

When Po’s long-lost panda father suddenly reappears, the reunited duo travels to a secret panda paradise to meet scores of hilarious new panda characters. But when the supernatural villain Kai begins to sweep across China defeating all the kung fu masters, Po must do the impossible-learn to train a village full of his fun-loving, clumsy brethren to become the ultimate band of Kung Fu Pandas.

With the previous two Kung Fu Panda films both receiving Oscar nominations for Best Animated Feature Film, there’s no doubt that this third film will be a fun and entertaining treat for kids. Plus the story line featuring Po’s father will surely bring about new aspects of the series not explored before.