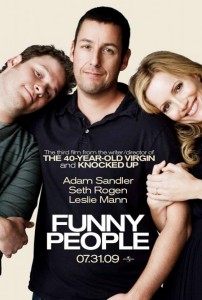 Headlined by Universal Pictures’ Funny People, the new comedy from filmmaker Judd Apatow starring Adam Sandler, Seth Rogen, and Leslie Mann. The darling of last year’s Festival, writer-director-producer Judd Apatow is in the spotlight once again this year with his latest comedy. Apatow directs Adam Sandler, Seth Rogen and Leslie Mann in Funny People, the story of a famous comedian who has a near-death experience. Salmon, the celebrity owner of an upscale Miami restaurant. To settle a debt, the Champ offers his wait staff (enter the Broken Lizard boys) a one-night-only challenge: top selling waiter gets ten thousand bucks; lowest selling waiter gets his face punched in, courtesy of the Slammin’ Salmon himself. It all adds up to one funny, frantic night as Broken Lizard does their best Glengarry Glen Ross. In World’s Greatest Dad, much-loved funny-man Robin Williams plays Lance, a high school teacher who writes a fake suicide note to cover up the embarrassing accidental death of his son. When the note ends up being published-and becomes an unexpected hit-Lance sees his ticket to the successful writing career he has always wanted. Director Bobcat Goldthwait will be at the screening. Opening this year’s Festival is the Canadian premiere of OSS 117: Lost in Rio. France’s kookiest and most famous secret agent, played by Jean Dujardin, is returning to Montreal to promote his latest film, which has already sold more than 2.5 million tickets in France. Director Michel Hazanavicius and Jean Dujardin will be on hand for this screening to open up the Festival.

If indie’s more your thing, head on down to the NFB CineRobotheque for the newest in independent comedy films from around the world, as part of a brand new partnership between Just For Laughs and the National Film Board of Canada. Leading the way on the indie side of the programming is Visioneers, a dark but hilarious look at the daily lives of desk-jobbers. Zach Galifianakis plays a man trying to ignore the fact that his co-workers are literally exploding from stress.

In Laughology, Montreal director Albert Nerenberg brings a little theory to the comedy festival, as he examines the science and history of laughter. Both he and Doug Collins-the man with the world’s most contagious laugh!-will be at the screening.