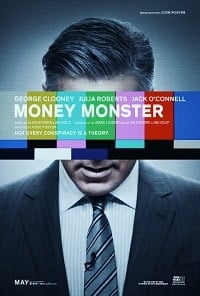 Jodie Foster’s latest directorial effort, Money Monster, can’t figure out if it wants to be a satire, a thriller, or a redemption drama.  Instead, it chooses D: All of the above.  The result is a sporadically entertaining morality tale that leaves you frustrated and depressed.  There are certainly echoes of a good movie here, and the performances engender more interest than the spotty script deserves, but it doesn’t have anything particularly new or interesting to offer, either. Money Monster is a middling stock that never really pays off.

When television news became a 24-hour a day business, it needed bottom-feeders like Lee Gates (George Clooney) to fill the empty time. Gates is the type of talking head “financial analyst” you want to punch in the throat repeatedly; dispensing hyperbolic financial advice like some pimped-out carnival barker.  His long-suffering producer, Patty (Julia Roberts), respects him so much that she took another job and didn’t even bother mentioning it.  Of course, Gates is too busy speed-dialing Wall Street hotshots to notice that his world is spinning out of control.  It comes as no surprise, then, when his exaggerated “can’t miss” claims finally bite him in the ass.

In case you’ve been sleeping for the last 150 years or so, Money Monster is here to remind you that Big Business doesn’t care about anything but the bottom line.  The only difference is that now, in the digital age, they can screw you even faster.  Overnight, a ‘High Frequency Trading Company’ called IBIS loses over $800 million due to a technical “glitch” in their trading algorithm.  At least, that’s what their CEO (Dominic West as ‘Walt Camby’) and his media mouthpiece (Caitriona Balfe as ‘Diane’) want investors to believe.  When IBIS’ stock tanks—a stock that Lee Gates had previously claimed to be “safer than a savings account”—disgruntled investor Kyle Budwell (Jack O’Connell) wants some answers.  Kyle is mad as hell and he’s not going to take it anymore, so he scrapes together enough explosives to melt a Terminator and takes Gates hostage during his own television show, Money Monster. 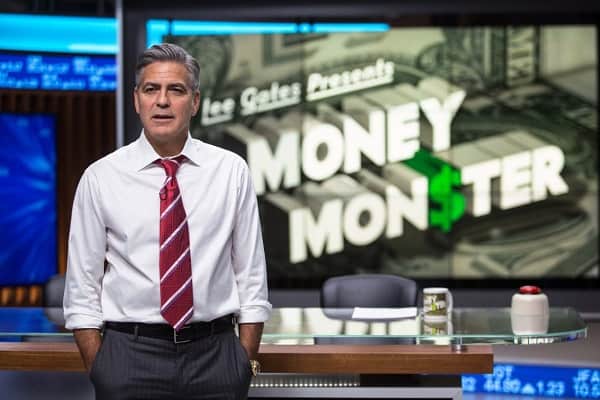 First the good… Foster and her screenwriters have given their story a wicked sense of humor.  Gates and Patty have a free-flowing, cutting banter that allows Clooney and Roberts to shine.  There is history between them, both on and off the screen, and their scenes together feel deeper than the spoken word.  Humor also helps to subvert our expectations on several occasions.  After Gates implores a captivated worldwide audience to buy IBIS stock so that Kyle will spare his life, the stock price actually goes down.  When the cops round-up Kyle’s pregnant girlfriend and bring her to the television station, she doesn’t exactly deliver the message of love and restraint we’ve come to expect from hostage films.  This off-kilter humor implies that at least one of Foster’s three screenwriters had designs on writing a satire.  The other two writers should have listened.

Instead, the filmmakers decide to go the hostage thriller route. The early scenes when Kyle first commandeers the studio are genuinely tense.  Clooney does a great job receding into the role of victim while still succumbing to his blowhard tendencies.  Roberts does no-nonsense bitchiness better than most, which makes her control room antics thoroughly believable and engrossing.  The problem is that Kyle’s character just isn’t compelling.  Sure, he lost his shirt in the stock game, but as Gates astutely (some would say stupidly) points out, so did millions of other investors.  What makes him so special?  Nothing really, and that’s a huge problem for Money Monster. 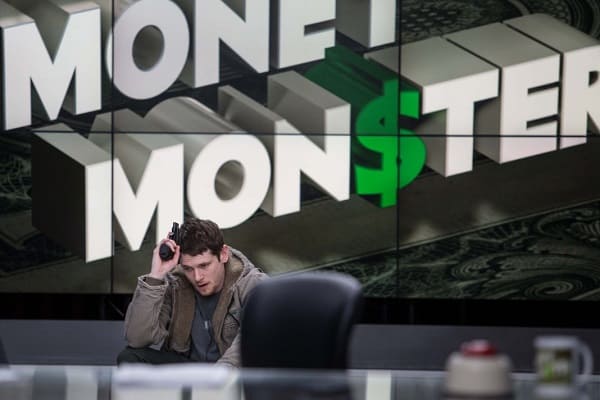 Such a huge problem, in fact, that Foster is forced to look elsewhere for action. First, she goes outside the studio to see what the cops are doing.  Giancarlo Esposito leads a task force of idiotic agents capable of mustering only one plan; put snipers in the studio and literally shoot the detonator off Gates’ body, possibly killing him in the process.  This only fills about 10 minutes of screen time, so Foster concocts some tomfoolery surrounding Camby and his IBIS cohorts to distract us from Kyle’s stagnant storyline.  Throw in a little Stockholm Syndrome to soften Gates’ hardened heart and what could have been a deliciously biting satire is reduced to a standard (not so thrilling) thriller.

Money Monster is a shining example of a great premise that can’t sustain an entire movie. It feels like the filmmakers said, “Okay, Kyle takes over the studio… now what?!?”  Given the recent housing bubble and a general cynicism toward ‘the establishment,’ combining two rabble-rousers like Dog Day Afternoon and Network into one movie must have sounded fool proof.  The problem is that the message is too simplistic and the delivery is too cluttered.  “Wall Street dudes are amoral!” isn’t exactly groundbreaking stuff. Money Monster has plenty to like, but it’s neither smart enough to engage your brain nor thrilling enough to turn it off.