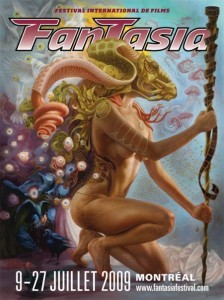 Montreal’s Fantasia Film Festival (July 9th to 27th), one of the most diverse and prestigious genre festivals there is, made its first lineup announcements, and they don’t disappoint.

A whopping thirty-five Japanese features will be presented, including the highly acclaimed four-hour epic Love Exposure, from director Sion Sono (Suicide Club). The film has already piled on awards, including Berlin’s FIPRESCI Prize. The opening film will be none other than Takashi Miike’s latest opus,Yatterman, based on the 1970s TV series. Perhaps most enticingly, the fest will be host to the North American premiere of Chan-wook Park’s Thirst, the vampire flick that earned him the Cannes Jury Prize. The Quebec movie scene will be represented once again with the return of the Fantastic Weekend of Quebec Shorts, which runs from July 24th through to the 26th. Hundreds of shorts will be featured, from newcomers and established talents alike. Quebec features will also be represented, including the second film by Robin Aubert (Saints-Martyrs-des-Damnés), a road movie filmed in modern day India.

The scary part? All of this is sure to be just the tip of the iceberg.

Also worthy of note: our very own Al Kratina will be among the judges in the Quebec DIY Short Film category! Congrats, Al.

(complete details on the 2009 edition available end of June)