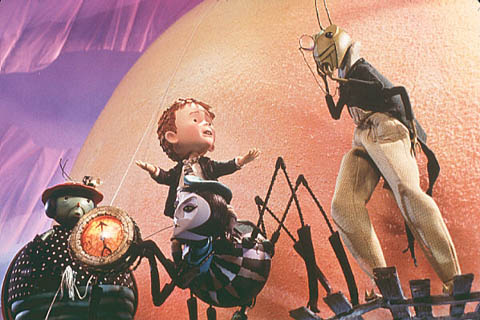 What would you do if one day, you woke up, and saw a peach as big as your house in the front yard? Would you go inside of that peach? Would you make friends with whatever was inside? Would you travel to New York while fighting robotic sharks and skeletal pirates? Of course you would! Well, that is, if you were the lead character of James and the Giant Peach, the Walt Disney live-action/stop-motion-animated hybrid film based on the Roald Dahl book of the same name, the topic of this week’s all-new Mousterpiece Cinema. In this new show, Josh and Gabe are joined by Andreas Stoehr of the Pussy Goes Grr film blog to discuss this follow-up to The Nightmare Before Christmas, also produced by Tim Burton and directed by Henry Selick. Did they find it soporific? Slight? Splendid? Other words that begin with “s”? Listen to find out!