Given how mad Toronto goes every World Cup, I expect that the Canadian Sport Film Festival will have no trouble finding an audience. The festival offers an exciting line-up of feature-length documentaries (with some narrative shorts thrown in for good measure) that should satisfy everyone sick of the multiplex. A quick selection:

Autumn Gold – Follow five athletes, each older than eighty, as they train to compete in a track and field contest. 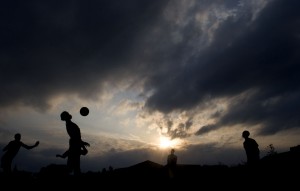 Pedala – Soccer may be the closest thing humanity has to a universal language. These filmmakers play the game with moonshiners in Kenya, women wearing hijabs in Iran, and prisoners in Bolivia, all in order to discover what makes it the beautiful game.

Beyond the Game – The bitterest competition featured in this festival, it seems, is between two Warcraft III players. This film tracks Grubby and Sky in the run-up to the world championship, Cybergames.

Salute – One of the most iconic moments of the civil rights movement happened at the 1968 Mexico City Olympics. Two Americans, Tommie Smith and John Carlos, raised their fists in the black power salute whilst standing on the podium. In an act of solidarity, Australian athlete Peter Norman wore an Olympic Project for Human Rights badge. This is their story.

Films start on the 30th; tickets are available online or at the door.