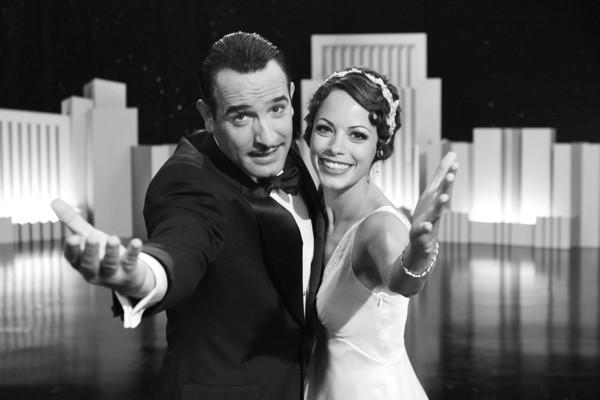 A Separation is one of the most intellectually stimulating pieces of entertainment I have experienced in a long time. It piles layers upon layers of intrigue, social commentary, ethical dilemmas, gender politics, and more. A tremendous amount of thought obviously went into the making of A Separation, and a tremendous amount of thought comes out of viewing it. It boasts that exceptional quality of intellectual stimulation that continues to haunt the conscience and imagination long after the screen goes blank. In the end, A Separation manages to break down some barriers with relatable emotional content that transforms empathy into introspection.

The Artist is a movielover’s movie. It gives nods to notable filmmakers like F.W. Murnau, Orson Wells, Alfred Hitchcock, among others, and all the while it’s winking at its clever audience. A silent film about silent films, it is unapologetically gimmicky. And who cares? Especially when a gimmick works this superbly. Jean Dujardin effervesces charm as a leading man, and his adorable canine companion turns out a star. Offering up dance numbers, dog acts, grandiose orchestration, period costumes, and old-fashioned theatrical dramatics, The Artist pulls out all the stops. This film exemplifies feel-good storytelling with impeccable humor and class.

The Descendants hits a symphony of emotional notes. Not in recent memory has a movie packed as many highs and lows so neatly into such a straightforward and engaging premise as this one does. The exotic Hawaiian settings offer breathtaking cinematic delights. The performances are astounding, especially from the incredibly talented youngsters the casting director has collected. But the strength of the story comes from its poignant, powerfully sentimental scenes about the basic human truth that family bonds triumph over all hardship. This movie can and will break your heart and warm it in the same breath. “The video artist turned narrative filmmaker Steve McQueen has spent his first two feature films exploring that nexus, finding pain, frailty, and something approaching transcendence, in that while the body and mind are inextricably linked, neither one can be strictly defined by the other… With the brilliant Shame, he looks bluntly at sex addiction in New York City, exposing it as not an addiction to pleasure, but to an act of personal nullification.”

“[The film] complicates the idea of the filmmaker and of filmmaking, digging into the actual mechanics of the medium. Panahi is engaging in a deconstructive, almost Derridian dialogue about his craft, the type of exercise that is often maligned as ineffectual and overly academic. But under the circumstances, it becomes a deeply emotional act of political resistance.”

The Kid With A Bike

“The Dardanne’s are concerned not with just one boy’s abandonment and rescue, but with how turning from those who are most in need of love weakens the social fabric. It is only through Samantha’s own stubborn insistence on sticking with Cyril, on taking his blows and helping pay for his crimes, that the boy is able to take responsibility for himself and his actions and to point himself towards a sense of acceptance and home. With The Kid With A Bike, the Dardenne’s have continued their distinctly modernist update of the morally committed cinema of Dryer and Bresson.” George Harrison: Living In a Material World is an infectious and inspirational outlook of one man’s quest for inner harmony through the means of creativity and music. Known to be the quietly outspoken Beatle, Scorsese screams new light on Harrison’s diverse and ingenious appeal. Through fluid compilations of home videos, photography and interviews; the film captures audience attention and ejects them on a 208 minute ride that could go on longer without hesitation. From the genesis of the band to its breakup, from George’s solo career with the Buddhist Tibet to his later quiet years; Living In a Material World effortlessly encapsulates the story of an extraordinary life with departing feelings of astonishment. To describe this film in one word, it’s feel-good. It makes you feel good to be alive, and to know that free spirit prevails. It makes you want to write a song, paint a picture or just do something; and knowing that a film such as this exists is simply comforting for the human soul.

Miss Bala is a real and raw look of one girl’s struggle to pursue her dreams of becoming a beauty queen, while stumbling onto the path of a ruthless cartel and corrupt officials. Providing an in-depth first-person look at the ways of street life and drugs in Mexico, Miss Bala plays as a “sell-yourself-to-the-devil” type of film. At times Miss Bala can be very slow and matter-of-fact. Seemingly impervious to the world she is now consumed in, Laura goes from drug runner who is dodging bullets to a pageant winner being taken advantage of, without ever flinching an eye. She knows what she agrees to be a part of, and the film tells it subtly as so. Yet when the film wants to be bombastic with its action, it has no qualms in being loud and in your face. Miss Bala takes pride in making political and societal statements, but doesn’t do so in a pretentious or self-aware manner. It just tells a story as is, where the consequences are expected right from the beginning. In the end what we get is a refreshing and sharply original story of a girl coming full circle on her squandered dreams.

Jodie Foster and John C Reilly play Penelope and Michael, Brooklyn natives whose young son got his teeth knocked out in a park by a peer. Kate Winslet and Christoph Waltz play Nancy and Alan, the parents of that peer, believably visiting to make amends. With feathers ruffled, a testimony of ‘who’s the victim and who’s the bully’ quickly becomes a winner-less battle of right and wrong. What makes this film near perfect is Polanski’s exquisite ability to emulsify any sights of fatty subplots that would normally project a storyline forward. There are no apartment fires, suspicious mail from a curious third party, even the children at hand are hardly seen besides brief moments in the introduction and epilogue. Nothing of that nature exists at all, for Carnage leaves no room for error. Instead what we get is a powerhouse film driven solely by the main conflict. It’s simple, precise, and neatly packaged for the audience to enjoy.