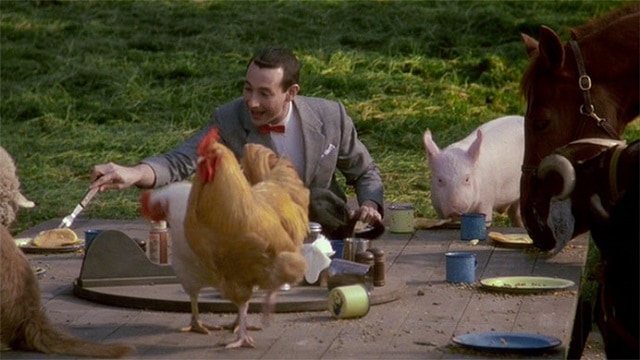 Following the success of the Tim Burton-helmed Pee-wee’s Big Adventure and the beloved children’s show Pee-wee’s Playhouse, Big Top Pee-wee is an uneven entry in the ongoing comedic career of Paul Reubens. Pee-wee Herman, the man-child with a heart of gold, is just as joyfully naive here, but love monopolizes the majority of his time and leaves little room for his wonderfully strange and imaginative explorations. Big Top Pee-wee is a sweet story, but it mistakenly emphasizes some of his least endearing qualities and keeps his spastic personality at bay.

After finding tremendous fame following the events of Big Adventure, Pee-wee spreads his arms and flies away from the overwhelming demands of show business. He heads to the country and settles on a farm for a more humble, quiet life. Pee-wee still dons his sharp gray suit and white patent-leather shoes for agricultural work with Vance, the talking pig, at his side. The practical Vance is his wingman, animal wrangler, and lab assistant. Pee-wee lives in harmony and as equals with his animals. He’s also had the time to experiment with the plentiful crops he cultivates to the point where he may have single-handedly solved world hunger. The promising concept of Pee-wee living in a utopian bliss is set aside when he ventures into town. We meet his school teacher fiance Winnie (Penelope Ann Miller of Carlito’s Way and The Shadow)- a nice woman but a complete mismatch for Pee-wee. The way he keeps jumping on top of Winnie when he visits her for a lunch date is cute up until it feels off-kilter; it’s repeatedly reinforced that this is a more sexually aggressive Pee-wee than we’re used to. There is a long and beautifully absurd bit involving Winnie being completely unaware of what Pee-wee’s favorite sandwich is, but the majority of their scenes wallow too much in his randiness. We also meet grumpy townsfolk who detest Pee-wee’s juvenile attitude and outlandish living. The idea of Pee-wee being selfish and completely annoying to a certain subset of people isn’t new, but what made Big Adventure so endearing was Pee-wee’s acute sense of purpose and the ability to turn around people’s bad attitudes with laughter or at least oddly divert their attention away from his incendiary shenanigans. 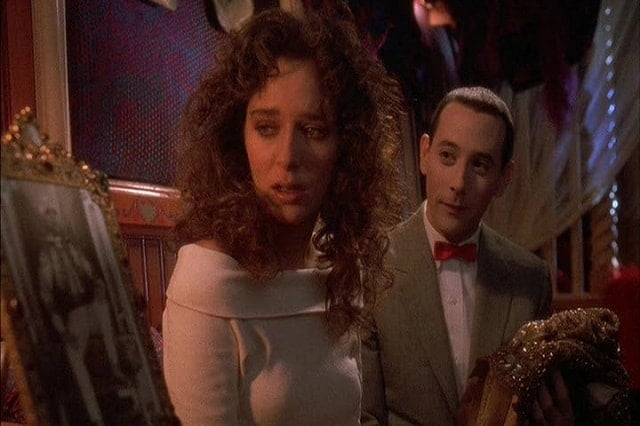 His nearly idyllic life is interrupted when a strong storm blows a circus into town. Gina Piccolapupula (Valeria Golino from Rain Man and both Hot Shots movies) is a bright, talented trapeze artist who falls for Pee-wee. Her animal sidekick is an elephant who loyally and adorably follows her about. Pee-we is also smitten with her as we see him stare at her costumed chest and pass out. This objectification and the act of looking salaciously at a woman without being intelligently checked by her, leaves the audience in a deficit. Pee-wee comes across as base and her initial inherent worth to him (and by proxy us) is put down to her physical attributes. Thankfully, Gina is given a backstory involving her father, and is fiery towards Pee-wee when she discovers the existing relationship with Winnie. This pushback is the only thing that makes the romance tolerable. A prolonged kiss between them that would have gotten this movie banned during the Hays Code era serves as a peculiar filler as the story progresses. It’s not that it’s grotesque, but that it ceases to amuse or serve any real function after a few minutes.

There are also some very blatant allusions to sex between Gina and Pee-wee which don’t sync up with the rest of the kid friendly storyline. A train racing through a tunnel is among the more scandalous images, but there are also a few seconds of women inexplicably wrestling in mud. This goes a step beyond a Tex Avery level of wolfish womanizing and gazing. The quick montage is bewildering and out of step with the plucky innocence of Pee-wee’s comedy, which often touches on adult topics but doesn’t go very far without resurfacing to a childish viewpoint. The tone of these scenes is all over the place, giving the film an unsure air. There’s also some implied polygamy in the movie that is a bizarre plot point at best and a lame sex joke at worst. A more charming relationship is seen between ringmaster Mace Montana (singer/actor Kris Kristofferson) and his pocket-sized wife- Midge (Susan Tyrell of John Waters’ Cry-Baby). She operates independently from him with sassy energy. They have a dynamic and reciprocal love that makes up for the tiny special FX of Midge not blending in well with the action. 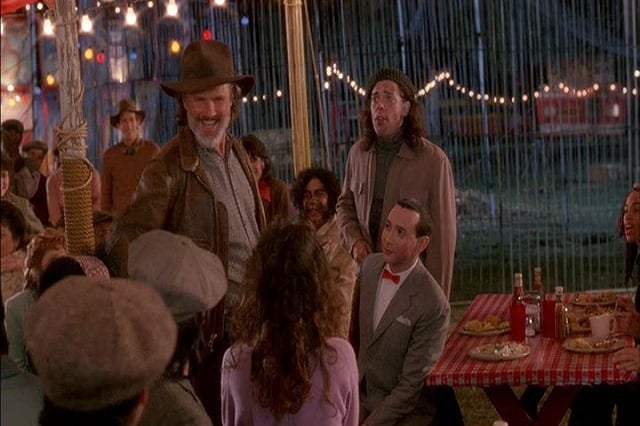 Pee-wee helps Mace house and feed the circus while brainstorming a way to reinvigorate their acts. That’s where his contribution ends. Although Pee-wee admires the circus and becomes dear friends with those whose lives revolve around it- he does not possess a unique enough talent to play a formidable role in it. He’s a “freak” without an outwardly definable trait to showcase. He accommodates them, but lets the circus take center stage as the movie moves on. In a crisis, he is able to use a scientific experiment to shrink the town’s grumpy adults into children who can enjoy the circus without cynicism. This development is frustrating because it leans into what the rest of the movie could have been if it didn’t preoccupy itself with his love life. The ideas of cooperation and acceptance in the circus come as a welcome although brief diversions. The interactions with the circus people are laced with a generous sentiment of tolerance towards all, no matter how someone looks or acts. (A bonus here is that Benicio Del Toro turns up in his feature film debut as “Duke the Dog-faced Boy.”)

Big Top Pee-wee is not a total miss. It again highlights Pee-wee’s contagious enthusiasm and is deeply affectionate of Reubens’ real-life roots with the circus. He grew up around circus folk in Sarasota, Florida and obviously has a real affinity for their eccentricities and passion for entertaining. The prolonged focus on Pee-wee’s amorous proceedings leaves us without much inventive magic but his positively weird view of the world shines through just enough for it to be a lively albeit mediocre outing.