The fine folks at Disturbia have been inspired by Taxi Driver’s Travis Bickle for their latest art print. The piece simply titled “Travis Bickle” is an 18″ x 24″ screenprint, has an edition of 50, and costs £17. Visit DisturbiaClothing.co.uk.

The fictional character from the 1976 film directed by Martin Scorsese, was played by Robert De Niro. He is widely considered one of the most iconic characters in film history, and De Niro earned an Oscar nomination for his portrayal of him. He is greatly inspired by Arthur Bremer, who attempted to assassinate presidential candidate George Wallace on May 15, 1972. 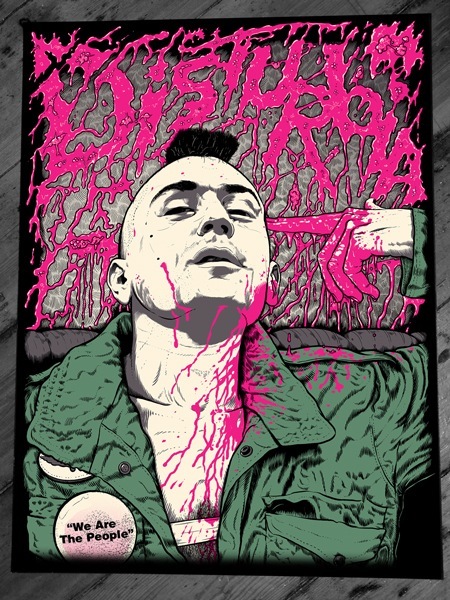 Lleju Productions has released the poster for their upcoming feature Cat Run starring Paz Vega. The film is  directed by John Stockwell and hits theaters on April 1st.

Anthony always dreamed of being a famous chef. Julian only thought about women. With neither really working out, the childhood best friends decide to start a detective agency. Unfortunately for them, on their first case they must help protect a sexy, high class escort who holds the key evidence to a scandalous cover up. The two bumbling detectives soon find themselves running from the mob, a corrupt US Senator, and a ruthless Mary Poppins-like assassin – all of whom would stop at nothing to hide the truth. It’s just an average day for two bumbling losers.

The Beaver Trilogy combines three separate vignettes that were filmed at different times, in 1979, 1981, and 1985. The three pieces focus on the same subject, a young man from the small town of Beaver, Utah who is obsessed with Olivia Newton John. The first piece, The Beaver Kid is a docmumentary. The second piece, Beaver Kid 2 is a dramatic work based on the documentary. The third piece, The Orkly Kid is yet another dramatic work based on the documentary.

The film was featured in the public radio show This American Life in the episode entitled, “Reruns.”