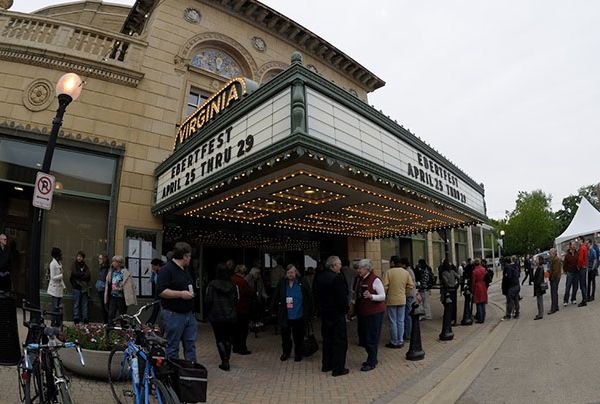 “Early in Lars von Trier’s Nymphomaniac, Young Joe (Stacy Martin) coos these words to one of the countless men she has sex with during the two part, 241-minute opus of depravity. While what she’s saying carries a clear erotic charge, her bluntly literal instructions aren’t a come-on so much as a desperate plea for fulfillment. As Joe relates her life story to the overeager stranger Seligman (Stellan Skarsgård), who found her lying in an alley near his home, what was first intended as a simple request for comprehensive penetration evolves into a tragic refrain, with the unsubtle subtext that might be expected from a filmmaker who has the word “fuck” tattooed across his right-hand knuckles. Joe is suffering from an incurable sense of incompletion. Loneliness, she tells Seligman, has been her constant companion. That simple admission confirms Nymphomaniac’s role for von Trier—this is the film that binds his work together. These are his confessions.”

“In the early days of Ebertfest, Roger personally introduced every film at this five-day event, which took place this year from April 23 to 27. He would be onstage for the discussions and question sessions after each screening, often joined by directors, actors, or friends in the industry.”

“There have been hundreds of monster movies over the years, but only a handful of enduringly great movie monsters. Of those, only two were created for the screen: King Kong, the giant ape atop the Empire State Building, and his Japanese heir, Godzilla, the city-flattening sea monster who’s a genuinely terrific pop icon. He not only stars in movies — Hollywood is bringing out a new Godzilla on May 16 — but he’s even played basketball with Charles Barkley in a commercial for Nike.”

Why Are 23.4 Million People Watching The Big Bang Theory?:

“TV shows are not supposed to be this popular, not in the age of DVRs, Netflix, and cord-cutting. Nevertheless, CBS’s The Big Bang Theory—an old-fashioned multi-camera comedy about four nerdy men and three women who tolerate them—is not only television’s No. 1 show but also the highest-rated sitcom since Friends signed off in 2004. Here’s why.”

Under The Skin and the Problem with the Adjective “Kubrickian” by Vadim Rizov:

“As unclassifiable and startlingly original as promised, Jonathan Glazer’s Under The Skin has an obvious experiential agenda. Scarlett Johansson’s unnamed alien rides around Glasgow, picking up men, bringing them back to her pad for sex, then harvesting them for meat. As sound designer Johnnie Burn told Ashley Clark in an interview Filmmaker published earlier this month, the intensely fussed-over sound mix literally took years. In the mall, at the club or on the street, different snatches of ambient sound compete for attention, with normally unexamined noises briefly coming to the fore. The movie is totally successful at defamiliarizing ordinary actions and objects. When Johansson’s alien tries cake (her first taste of normal food), a long close-up follows her fork as it moves with painful slowness towards her mouth; it’s like nothing of the kind has ever been filmed or experienced before.”

Critics Weigh In on Patriarchy and the Vanished Film Print:

“Summer is sequel season, when the movie studios celebrate their lack of imagination by disguising it as populism. Why should movie critics be any different? Five years ago, we published the first installment of our “Memos to Hollywood,” in which we presumed to give advice to everyone involved in the making, distributing and watching of movies. And now we’re back with another spectacular, game-changing, blockbuster episode. This time, they’ll pay attention.”

6 Reasons To Love The National Film Board Of Canada, On Its 75th Anniversary:

Louis C.K. Against The Common Core:

“On Thursday morning, thousands of children who attend public school in New York City will be sitting down for the second of three days of standardized math tests. Among them will be the offspring of Louis C.K., the comedian. Earlier this week, he took to social media to express his frustration at his daughter’s math homework, tweeting the questions she was required to solve to his more than three million followers. “My kids used to love math! Now it makes them cry,” he wrote.”

Video: SNL’s trailer for The Beygency: