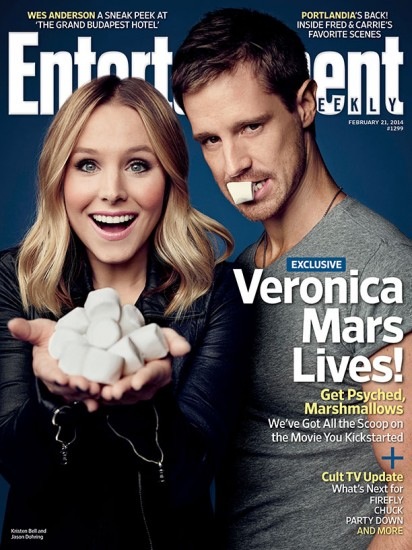 “Check out this unearthed 1977 letter from Clint Eastwood to film critic Andrew Sarris, wherein Eastwood thanks Sarris for his Village Voice article on the “Dirty Harry” franchise, titled “Is Harry Too Dirty?” Eastwood gets to expound on the perceived messages in his films, complaining that ones with anti-capital punishment agendas like “Hang ‘Em High” got little media attention, while vigilante crime classic “Dirty Harry” and its sequels — which are about, in his words, “concern for the victim” — results in Pauline Kael calling fascism.”

‘Best director Oscar nominee Alfonso Cuaron did a Reddit AMA Thursday, promoting his film Gravity, which is still in theaters and hits Blu-ray February 25. As tends to be the case with these, topics were all over the map, and we’ve grabbed the most interesting bits.”

“THE FILM IS COMPLETELY UNAFRAID TO SCATHE THE HERO’S JOURNEY WHILE STILL EMBODYING MUCH OF WHAT MADE IT WONDERFUL IN THE FIRST PLACE. SOME OF YOU HAVE EVEN NOTED THAT IT SO WEIRDLY MIRRORS MUCH OF HULK’S EXACT TAKE ON IT IN THE SCREENWRITING BOOK, BUT IT SAYS EVERYTHING SO MUCH MORE BEAUTIFULLY THAN THAT. IT ESCHEWS EVERYTHING GROSS AND ICKY ABOUT DESTINY AND PEOPLE THINKING THEY ARE BORN TO BE INDIVIDUALIST RANDIAN HEROES AND INSTEAD GROUNDS EVERYTHING IN BASIC HUMAN RELATIONSHIPS, WANT AND NEED. HEROES AREN’T BORN DEMIGODS. THEY AREN’T PICKED. IT’S A POSSIBILITY WITHIN EVERYONE AND WE ONLY GET THERE BY BELIEVING IN OURSELVES AND FINDING THE KINDS OF PEOPLE WHO BELIEVE IN US. HEROISM ISN’T A BIRTHRIGHT THAT WE FUTZ AROUND. IT’S A CHOICE. AND IT’S REALIZED THROUGH BOTH WILL AND GENUINE EMPATHY.”

10 Jokes From Blazing Saddles That Would Never Make The Cut In 2014:
The classic Mel Brooks comedy Blazing Saddles was released 40 years ago today, well before most of us were born, so when you’re done reading this, you can call your dad and remind him just how old he really is. Today’s so-called spoof directors could clearly learn a thing or 10,000 from one of the genre’s forefathers, Mel Brooks, because there isn’t a hilarious joke idea in Aaron Seltzer’s or Jason Friedberg’s brains that could still make people cry from laughter 40 years from now the same way that “Excuse me while I whip this out” still makes me smile like an asshole.
Sid Caesar, Comedian of Comedians From TV’s Early Days, Dies at 91 from The New York Times:
–
“Sid Caesar, a comedic force of nature who became one of television’s first stars in the early 1950s and influenced generations of comedians and comedy writers, died on Wednesday at his home in Beverly Hills, Calif. He was 91.”
–
Watchmen and V for Vendetta author Alan Moore talks movingly about being excluded from school for selling drugs:
–
“It is quite shocking how vividly Alan Moore recalls the isolation he felt after being excluded from education at the age of 17. It was 1970 and on the Friday night he and his fellow ArtsLab creatives had put a show on in Northampton Central Library’s performance space, Carnegie Hall. The Monday after that triumph Alan was in the headmaster’s study at Northampton Grammar School (now NSB) being told that for him, school days were over.”
–
The twisted genius behind RoboCop, Total Recall, and — yes — Showgirls by Alex Pappademas:
–
“A remake of the 1987 sci-fi movie RoboCop opens this week, nearly a decade after it was first announced. The director is the talented Brazilian action auteur José Padilha, who made the Elite Squad films; Joel Kinnaman from The Killing plays the cop who gets robo’d. (Spoiler alert, I guess, but come on.) The early reviews have been grudgingly positive, which is kind of the best thing a profoundly unnecessary movie like this can hope for. Obviously, that the new RoboCop isn’t terrible won’t change the minds of the many people who’ve opposed the remake on general principle from the beginning. But to a movie studio with a portfolio of intellectual properties and an obligation to exploit them, those people don’t matter. And neither does Paul Verhoeven.”
–
Fandor’s Dennis Harvey on the rise and fall of sword-and-sandal films:
–
“This year alone we will see two big-budget Hercules movies, plus this spring’s 300 sequel and the ancient action-intrigue-then-volcano popcorn epic Pompeii. That’s a whole lot of musclebound Mediterranean men in togas throwing spears at each other—more than we’ve seen since the brief eighties heyday triggered by Ahhnold’s original Conan the Barbarian.”
****