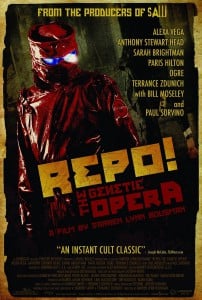 Fewer words, I imagine, strike greater fear in the minds of audiences and producers alike when the words “passion project” are thrown around. After helming three straight Saw sequels, long-suffering director Darren Lynn Bousman finally gets to cut loose creatively with his gory rock opera Repo, which evolved from a series of quickie stage improvisations courtesy of the film’s writer/composers, Darren Smith and Terrance Zdunich. Unfortunately, the film turns out to be more Across the Universe than Hedwig and the Angry Inch, eager to please but ultimately less than enjoyable for anyone not a devout enthusiast of its chosen musical framing – except in this case, it’s a nostalgia-fest for turn-of-the-90’s goths instead of baby boomers.

Set in a cartoonishly grim future, Repo revolves principally around Nathan (Head), a “repo man” who impolitely collects organs from hapless citizens on behalf of GeneCo (led by Sorvino’s sinister, dying Rotti), a massive conglomerate that swooped in to commodify healthy organs following a deadly epidemic of organ failures. His daughter, Shilo (Vega), is ill with the blood disease that claimed her mother, and is kept in unwilling sanctuary in his home. Meanwhile, Rotti’s offspring (Moseley, Hilton and Skinny Puppy’s Nivek Ogre) bicker, in an obvious nod to King Lear, over which one will inherit their decaying father’s empire. Oh, and somewhere in the mix there’s also Mag (Brightman), a celebrity singer with GeneCo-implanted holographic eyes who’s trapped in a dead-end contract.

If the plot seems needlessly dense, that’s because it is, and the film is crippled at the outset by its ludicrous number of characters and plot threads, never to recover. This undercuts both the plot’s coherency – already tenuous at the outset – and the integrity of the performances proffered by its diverse cast. Particularly wasted is Moseley, who brings his character to slyly sadistic life, but doesn’t get much chance to develop in his eight or so minutes of screen time. Others get shoehorned into thankless roles – Vega, who has Broadway experience and shows evidence of being a capable performer, is saddled with a bratty, shrill heroine, and Sorvino, as the film’s principal villain, is never able to find a consistent tone either of internal anguish or righteous indignation, largely because he’s provided with a few too many motivations relating to nearly every other character. The supporting cast is uniformly competent – including the widely reviled Hilton – but none besides Mosely leave much of an impression. Head’s “repo man” suffers most – his character enjoys his grisly work at some points and is disturbed by it at others, simply at the film’s convenience, making him useless either as a figure of scorn or sympathy.

Smith and Zdunich don’t only botch the film’s plotting but also its densely arranged musical score, which spends most of its time occupying a confounding space somewhere between Ministry and Evanescence that simply shouldn’t exist. Occasionally, a novel vocal harmony or passably funny lyric will arise (particularly in scenes where Head and Sorvino duet), but none of the individual songs are at all memorable. There’s an opportunity for redemption in the film’s embrace of over-the-top satire near the film’s conclusion (featuring a memorable moment where Hilton’s character loses face a bit) but ultimately opts for a lame, sequel-ready non-ending. For all of the film’s references and targets, its Vaseline-on-the-lens aesthetics, leaden musical numbers and generally witless approach keep it from joining the ranks of the beloved “outsider” musicals its creators so obviously worship.