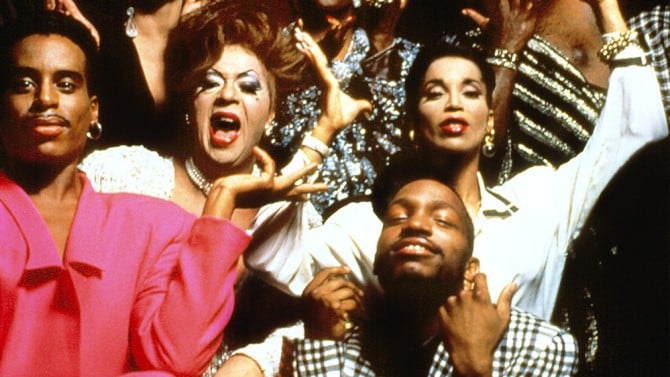 25 years ago, Paris is Burning (Jennie Livingston), screened at Sundance where it won the Grand Jury Prize for best documentary. For many, the film represents an important step of recognition for transgender and queer people of colour. In the film, which depicts the drag ball culture of New York City, the various participants discuss their search for acceptance and their desire to be stars. While wrought in controversy, as some audiences see the film as little more than an exploitation of vulnerable participants, the film is not wrought in the self-congratulation of an “enlightened” liberal filmmaker. The bright colours and glowing lights place the subjects on the same pedestals as the great stars of melodrama: the cinematic world of Paris is Burning reflects the dreams and desires of the participants.

So much of Paris is Burning is devoted to the creative aspiration of its subjects. Performance is central to their day to day life, from “passing” to a desire to see themselves in the spotlight. Octavia Saint Laurent aspires to be a model. Her apartment walls are adorned with Supermodels, she builds a portfolio and she goes to conventions. Her dreams are big, and she’s willing to work hard to make them come true. But, the deck was stacked against her. Black and transgender, she would struggle in 2016 – in the late 1980s, her chance of success was negligible. It didn’t matter if she was the best or if she worked hard, she would not have her fair shot. While appearing in one of the greatest documentaries ever made is nothing to slouch at, Octavia, like many of the subjects, dreamed far bigger than the runways of the drag ball. Paris is Burning showcases the lives, the performances and the nuances that audiences need and want more of.

In light of recent debates of #OscarsSoWhite the dreams and aspirations of the various participants feels all the more tragic. These are people fighting for their lives, literally. By the time the film was released, one of the most vibrant screen presences, Venus Xtravaganza had been murdered. By the mid-2000s, the vast majority of the cast had also been found dead by disease or violence. The balls represent far more than just a ground for play, they represented a life force in an unfriendly and unforgiving world. Looking back and thinking that things have changed is misguided: The current debate about representation onscreen is rooted in both the redemptive power of art and the violence of erasure. Even side-stepping the lack of people of colour, the celebration of a film like The Danish Girl “[exploits] a minority without bringing any benefit to that minority” (be sure to read Sally Jane Black’s full analysis of The Danish Girl for a better understanding of the film’s exploitative lens). As audiences, we are being spoonfed white-washed narratives that do little good and a lot of harm, documentaries like Paris is Burning show is a sliver of what we’re missing out on.