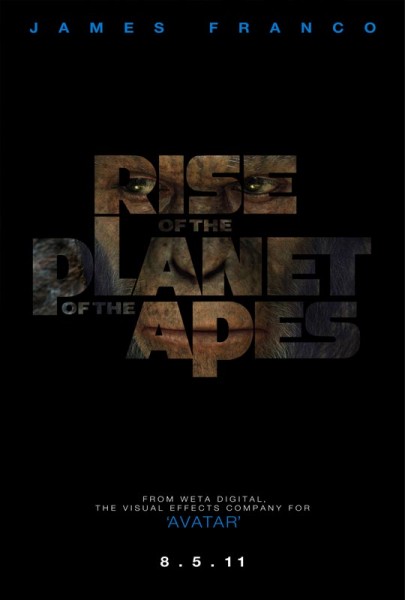 We showed you unofficial poster art created for Rise of the Planet of the Apes before, now we give you the first trailer for the prequel set to explore the origins of how exactly these apes came to power in the previous installments. Offering a fresh take and essentially rebooting the franchise, the film stars James Franco (Your Highness, 127 Hours) as the scientist who inadvertently gives the apes new life, Freida Pinto (Slumdog Millionaire), John Lithgow (TV’s Dexter, Leap Year), Brian Cox (Red), Tom Felton (Harry Potter) and Andy Serkis (The Hobbit, Lord of the Rings). From WETA, the same VFX team that gave us the worlds of Avatar and The Lord of the Rings, witness the rising August 5, 2011. Official synopsis and trailer after the jump.

“RISE OF THE PLANET OF THE APES is an origin story in the truest sense of the term. Set in present day San Francisco, the film is a reality-based cautionary tale, a science fiction/science fact blend, where man’s own experiments with genetic engineering lead to the development of intelligence in apes and the onset of a war for supremacy.”