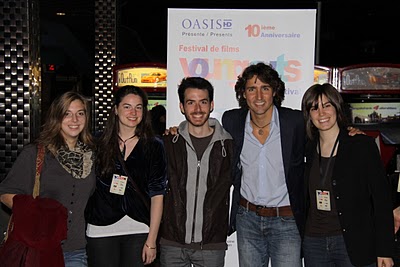 Courtesy of the YoungCuts Film Festival

Who Made It? Directed and Edited by Phil Lubenskyi

Where Is It From? Canada (Quebec)

Who Is the Director? There he stood, camera aimed at a girl eating a man alive. She then proceeded, in her ripped clothes drenched in corn syrup and red colorant, to ask him if the shot was good. He knew then and there, staring at his fabricated zombie characters, that this is where he wanted to be.

Phil Lubenskyi is a movie buff. He’s been shooting movies since he borrowed his first camera at 17 years of age. Since then he’s worked on many sets beyond his own; he’s even won first place in the Montreal 24 hour Film Race in 2009. Whether he was a Cameraman, DOP, Director, Grip, Editor or even an Actor, Phil always pushes to learn more and more about the film industry. Alongside several corporate contracts, he worked for networks such as nuvoTV, The W Network and Zone 3. He’s also practiced Machinema (making movies through computers), assisting in the production of video game trailers for Eidos Montreal.

With his team, he’s recently founded Chimera Sky Studios, a multimedia company specializing in all aspects of Video Production. What Is It? Promotional Documentary

What Is It About? Summary of the 2011 YoungCuts Film Festival based on footage from the Opening Charity Cocktail Party and the Journées de la Culture Screening.

YoungCuts Statement Phil shot and edited this short film documenting the frantic insanity that marks the opening of the YoungCuts Film Festival. He did a great job catching us at our busiest and best time. You can watch more videos HERE!

If you are a young filmmaker and would like to submit your short film to the 2012 YoungCuts Film Festival, HERE’S HOW!

Video of the day is brought to you in part by Canadian Heritage.