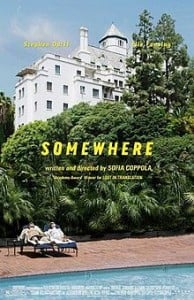 Sofia Coppola’s newest film about a Hollywood actor who lives the fast life and is suddenly forced to make room for his eleven year old daughter took away the most coveted prize at the Venice Film Festival this year. This is Coppola’s second prize at the festival, her first coming in 2003 for Lost In Translation where she won the Lina Mangiacapre Award.

Other notable winners include director Jerzy Skolimowski and actor Vincent Gallo who both take away awards for their involvement in Essential Killing. Mila Kunis also takes away a prize for her performance in Black Swan; the film’s only award of the festival.

See the rest of the awards at the Venice Film Festival website.