One of the big stories to come out of Sundance this year is that there are two films programmed about the same subject. In 1974, Florida TV reporter Christine Chubbuck killed herself on-air. At the time of this writing, I have not seen the documentary Kate Plays Christine, which follows actress Kate Lyn Sheil as she prepares to play Christine in a dramatized account of the event, though, Sundance Gods permitting, I do plan on seeing it. The film I am qualified on writing about is Antonio Campos’s latest, a fictionalized account of the final weeks of Christine’s (Rebecca Hall) life leading up to her tragic suicide. Campos, having made the unsettling Afterschool (I have not seen Simon Killer), continues to prove himself as a formidable filmmaker skilled in creating haunting, lingering films.

Campos and cinematographer Joe Anderson keep their frames tight and focused on Christine, subtly emphasizing the amplifying tension and pressures of Christine’s life on her. Campos directs the script by Craig Shilowich with a calm, studied intimacy. Each scene is tight, dialed into Christine’s mindset. Shilowich’s script probes around at what makes her tick. One scene in particular that highlights this is when she goes to a transactional therapy meeting where participants engage in a game called “Yes, But.” They list a problem they would like to fix, and the other offers a solution. They respond with “Yes, but…” and list off a reason why that won’t work. To hear Christine list off reason after reason why she cannot fix her problems is heartbreaking to witness in Hall’s frustration.

Speaking from personal experience, Hall gives one of the most honest and raw portrayals of what it’s like to live with mental illness ever seen. As well as Campos constructs his film, it doesn’t work for a second without Hall. Hall embodies Christine in every fiber of her being, in every moment on screen. She walks with a slight hunch, signifying the weight of the world on her. Each interaction she has reveals a new aspect about her – her talent, her vibrancy, her difficulties – and Hall authentically sells all of it in creating this fully formed representation of Chubbuck. You get the full spectrum of Christine with Hall, and she holds nothing back. Whoever picks up the film should do so with the intent of an Oscar campaign for Hall. 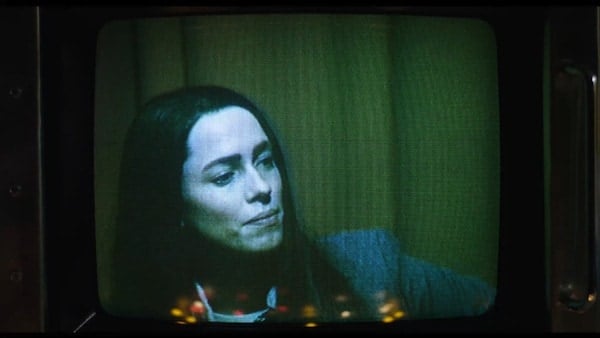 There’s not a lacking turn from the rest of the cast. Michael C. Hall plays George Peter Ryan, a fellow news reporter with a charm that totally makes sense when he reveals he was a football star in high school. Tracy Letts plays Michael, the station manager, with both authority and comedy, Timothy Simons embraces the inherent cheese of the 70s weatherman, and Maria Dizzia plays Jean, a friend/colleague of Christine’s with an authentic warmth. If these descriptions make the film sound like a comedy, it should be stated that the film is far from one, though it does allow for the emotion of humor to come through these characters when appropriate.

The fact that it does allow for the emotion of humor in such a tragic and dark tale speaks to one of the chief strengths of Christine – you get the full spectrum of emotion in her life. Whether or not you’re familiar with her fate before walking into the theater, the tragedy of her death is felt and is shocking. The one lacking aspect of the film is that as expertly crafted and performed as it is, Christine never quite crescendos to some sort of thematic realization. Chubbuck’s story isn’t utilized to examine much thematically past face value, but the film is eerie and haunting regardless. Christine is a character study first and foremost, with a completely authentic representation of mental illness from Rebecca Hall.