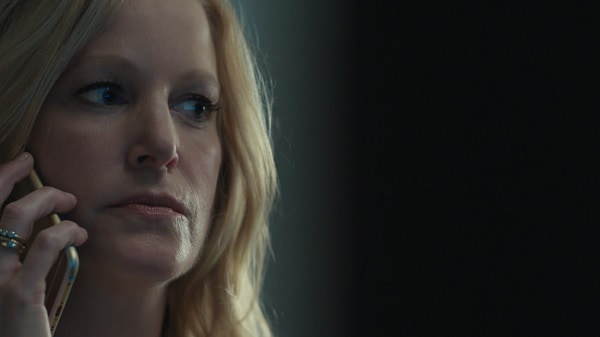 Billed as the “First Wall Street drama about women,” Equity takes a lot of weight upon its shoulders. It succeeds when director Meera Menon stays focused on the minutiae of money. As a character study, however, there’s not much insight into the female experience. These are the same male powerbrokers that we’ve seen before, only with women reprising the roles. Still, Equity excels as a gripping financial thriller, even if it lacks the groundbreaking impact it intended.

“I like money,” Wall Street account manager Naomi Bishop (Anna Gunn) concedes. It doesn’t quite resonate like, “Greed is good,” but it’s an unapologetic launch point for our power-hungry heroine, who assures a roomful of female professionals that it’s okay to like money. Sadly, it’s one of the few scenes in Equity when we really get inside of her head.

Naomi is biding her time at a large firm, searching for that one splashy account to land her a coveted promotion. Her assistant Erin (Sarah Megan Thomas) has ambitions of her own. She’s smart, motivated, and six weeks pregnant. Not surprisingly, Erin is hesitant to reveal that last tidbit of information. Finally, there is Sam (Alysia Reiner). She and Naomi were friends in college, but their lives took wildly different paths. Now, Sam is a securities investigator for the United States Attorney’s Office. In other words, she is now the enemy. Naomi becomes a target of interest after her boyfriend Michael (James Purefoy), a shady hedge fund manager at Naomi’s firm, is implicated in a trading scandal. Michael has more than his finger on the pulse of the company, and Sam is suspicious that Naomi has gone “across the wall” between account managers and traders. 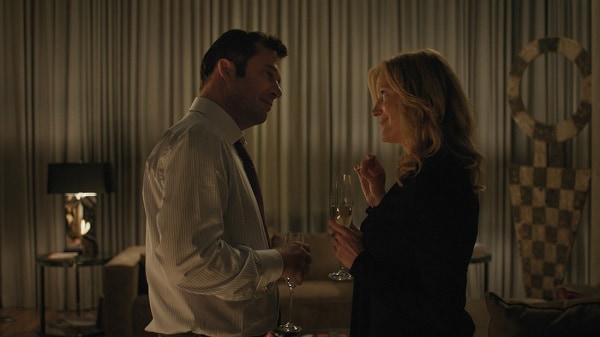 When director Meera Menon (Farah Goes Bang) and her screenwriter, Amy Fox, stick to the dicey dynamics between their three female firebrands, Equity is a propulsive thriller. This is a movie of action, where dialogue sets the stage for the next confrontation rather than exploring these complicated characters. Guessing who will backstab whom is a sublime delight, with each woman (seemingly) having the upper hand at various times. The ongoing game of Jenga between Naomi and her conniving boss perfectly symbolizes the precarious nature of their business. No matter how smoothly she manipulates the stack, there is always someone else countering her moves. “I don’t think this is your year,” her boss deadpans, as if years grow on trees for middle-aged, female account managers.

The foundation is certainly laid for a provocative character study. These are smart ladies who aren’t afraid to kneecap the competition. They don’t have the luxury of lamenting how this male-dominated world has compromised their humanity or destroyed any chance for a normal private life. A self-torturing Naomi asks Michael if men feel the same regret over a blown business deal, to which he responds, “Yes, but we usually find someone else to blame.” It’s a theme that re-surfaces again and again in Equity; women internalize the failure that men blame on one another. Not exactly the prescription for a happy life. 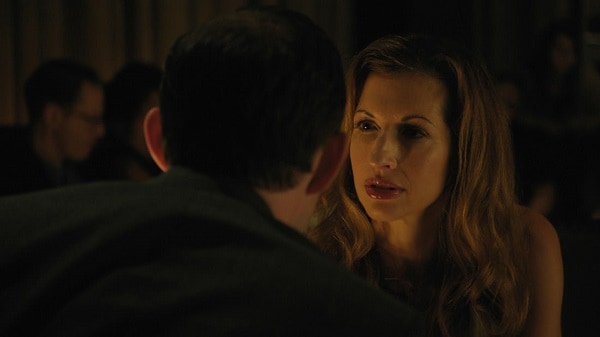 This is about as deep as the filmmakers are willing to go, however. Clearly designed for accessibility, Equity stays focused on high-stakes wrangling and avoids the messy personal details. It’s at once refreshing and disappointing; Menon skillfully sidesteps any ‘Movie of the Week’ sanctimony, but she also omits the juicy rationalizations required to keep these women on top. By refusing to search for Naomi’s soul, Menon creates a largely soulless affair. Simply put, these characters are fun to watch, but they aren’t particularly interesting.

Still, it’s wonderful to see Anna Gunn forging a new identity as an actress. Most viewers know (and largely hate) Gunn as Skyler White on the iconic Breaking Bad, but Naomi would gleefully disembowel Skyler for being Walt’s cowering accomplice. After sending her assistant on a cookie run, she publically undresses him for selecting a cookie with barely any chocolate chips. In this world, any perceived slight is met with a venomous reprisal, and Gunn is clearly up for the challenge.

Equity is a straight-ahead financial thriller that never loses its grip on your throat. Like its secretive characters, however, it seems terrified by the prospect of supplying any insider information. Menon’s assured direction and Gunn’s mesmerizing performance make Equity a winner, but it falters as either an inspiration or a cautionary tale for enterprising female viewers. Though it may fail to enlighten, Equity certainly entertains, which was more than enough to send its stock soaring at Sundance.