There’s nothing quite like witnessing the beginnings of a great filmmaker. In 2014, Jeremy Saulnier came to Sundance with the brutal, intelligent and intimate thriller Blue Ruin, and instantly signaled that he was a filmmaker to pay attention to. Full disclosure: Blue Ruin was my favorite film of 2014. I anticipated Green Room with a fervor that I have with few other films, and Saulnier’s followup is confirmation that we are witnessing the beginnings of a great American filmmaker. Green Room is a hyper-inventive work of brutal, uncompromised filmmaking.

Green Room follows a punk band, The Ain’t Rights, consisting of Pat (Anton Yelchin), Sam (Alia Shawkat), Tiger (Callum Turner) and Reece (Joe Cole) as they are on the last leg of a flailing tour in the northwest. They take an offer to play at a venue run by Neo-Nazis, but in the process they witness a brutal act of violence take place. From there, the film spirals into constant tension and dread as The Ain’t Rights are trapped in the venue from the skinheads and forced into an uneasy alliance with Amber (Imogen Poots), a young woman who is just as threatened as they are. Outside, a group of skinheads led by Darcy (Patrick Stewart) try to silence them at any cost.

There’s always a sort of apprehension that comes when a great independent filmmaker works with Hollywood actors for the first time, that their authenticity may be diminished in the process, but nothing is diluted here. There’s not a lacking turn among the entire cast. Among them though, Blue Ruin star Macon Blair once again stands out as Gabe, the quasi-manager of the music venue. In each interaction, you see the tear between his loyalties to Darcy and his desire to resolve the situation without death in his face, a dichotomy that Blair subtly balances. This is a side of Patrick Stewart never seen before. In both real life and film, he’s a generous, benevolent man. Here he is a terrifying presence, each line from him coming with unwavering authority and threatening certainty as he tries to maneuver the situation to his gains. He still keeps Darcy completely human, though in moments both terrifying and tragic, never letting him fade into caricature. 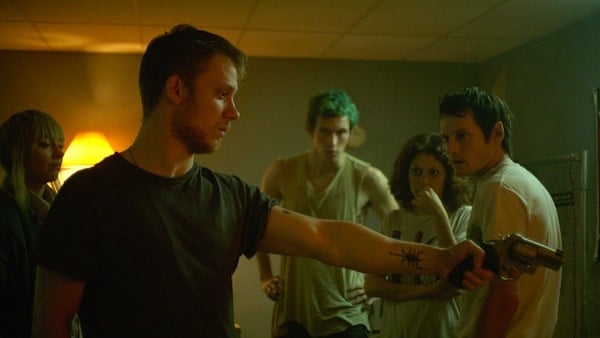 The script by Saulnier is an expertly crafted exercise of tension. Similar to Blue Ruin, Saulnier subversively shifts the grounds of expectation underneath the audience. He presents familiar story structures and beats in this siege movie, but shifts them ever so slightly in efforts that constantly keeps the film from falling into predictability. Saulnier understands both tension and release in how he constructs his violence and action, and he has the confidence that the audience can engage with this spiraling tale without having to hold their hand. Characters don’t get bogged down in exposition as Saulnier lets those story elements unfold visually. There’s also a good sense of dark humor that permeates throughout Green Room, one example being a recurring gag involving what “desert island band” each member would pick. Working with cinematographer Sean Porter, the two create vice-like aesthetic of dread that permeates each frame. The color palette shifts to a greener hue to signal the oncoming danger inherent in the title. They make tremendous, inventive use in how they shoot in largely one location, hardly ever using the same setup twice. The frame subtly grows smaller with rising tension, amplifying the immediate threat in the film.

This is a very violent film, full of images of shock and recoil. Saulnier doesn’t necessarily glorify the violence though; he lets it play out in a manner that feels unrehearsed and real. Violence is ugly, and Saulnier portrays it that way. The violence in this film has consequence, and he doesn’t let you look away from it. The effects team on this film does top notch work, as certain violent and gory images stick with you long after the film. Green Room pulsates with the impact of an immediate midnight cult classic – it’s brutal, ambitious, thrilling, fun and unforgettable. More than anything though, Green Room is the film that unquestionably proves Jeremy Saulnier is an all-time great filmmaker in the making.