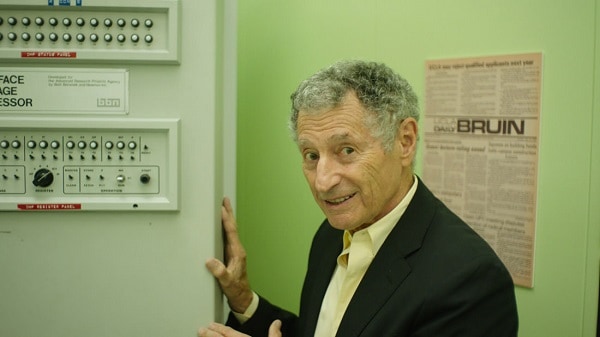 Lo and Behold, Reveries of the Connected World
Directed by Werner Herzog
USA, 2016

It’s a credit to Werner Herzog that even one of his lesser efforts is better than most of what’s out there. His new documentary, Lo and Behold, Reveries of the Connected World, plays like the internet’s family scrapbook; we learn what it is, where it was born, and what it might be when it grows up. There are just enough Herzog flourishes and quirky interviews to keep the dry material interesting, even if this guest is 10 years late to the party.

On the UCLA campus, at the end of what Herzog describes as a “repulsive” academic corridor, sits an old steel cabinet containing the primordial guts of the internet. In 1969, two California computers communicated remotely with each other, transmitting the word “Lo” before having a catastrophic meltdown. Herzog divides his reveries into 10 different chapters, each with a distinctive focus. We learn about the creation, manipulation, morality, legality, and evolution of the internet. Again, there’s nothing particularly groundbreaking here, but it’s all presented with those Herzogian flourishes that we’ve come to expect.

There is also more frivolity here than we’ve seen from Herzog in the past. He openly jokes with interview subjects and throws out some of his legendary phraseology to describe various internet follies. “Malevolent druid dwarf” is a special highlight.   He lingers on the soccer match of some automated robots, effusing that they might someday compete in the World Cup against their human counterparts. Whether Herzog’s lightheartedness is a deliberate maneuver to moisten this dry material or he’s just feeling a bit less fatalistic these days, it’s a welcome addition.

Most of his interview subjects are entertaining and suitably quirky, as well. Herzog’s good friend, theoretical physicist Lawrence Krauss, is particularly game, speculating as to whether the isolation fostered by digital emersion is really such a bad thing (as an aside, Krauss will play a baddie in Herzog’s next feature film, Salt and Fire). Ted Nelson, an early pioneer in the development of the internet, makes a compelling argument in favor of his theory on “interconnection.” That modern programmers have abandoned his ‘verbal tree’ style of information linkage hasn’t stopped Nelson from beating the drum. In technological parlance, if the modern internet is a VCR, Nelson’s internet was the Betamax.

Of course, there is plenty of visual detailing that only Herzog can provide. Cows in a pasture race for their life as a massive rocket lurches from its launch pad in the background. A group of hillbillies have a banjo and fiddle hoedown in the shadow of a monstrous radio telescope. Perhaps the most quintessential Herzog moment, however, comes as he takes the testimony of a grieving suburban family. After their dead daughter’s accident photos were hacked from police files and callously passed around the internet like morbid trading cards, the angry mother is led to proclaim, “The internet is the antichrist!” Despite the already sensational nature of this scene, Herzog is careful to include three trays of ginormous muffins in frame with the family. Why? Only Herzog knows for sure, and it’s unlikely he will share his rationale.

Still, there’s no escaping the fact that this material isn’t particularly fresh and seems too benign for Herzog’s exotic tastes. Sure, he interjects some oddball existential questions, like, “Does the internet dream of itself?” but this is just a glorified survey course in computer history. Interesting threads, such as the massive internet hack by the group (or individual) known as Titan Rain, are left tantalizingly unexplored. Other bits, including a group of individuals afflicted by electromagnetic sensitivity, fall completely flat and seem disconnected from the larger picture. It feels like Herzog wanted to do a hardcore scientific documentary (such as his protégé, Errol Morris, with A Brief History of Time), but didn’t feel comfortable tackling a subject so anathema to him (Herzog has publically stated his disdain for “smart” technology and social media). The result is a documentary that hedges its bets between academia and pop science.

This isn’t Herzog’s best work, but Lo and Behold, Reveries of the Connected World is still an entertaining watch. It might be a good place to begin for tech-challenged folks, or maybe serve as a primer on the philosophical conundrums of the digital age. Plus, it’s a delight to see Herzog have some fun for a change. There isn’t much new information here, but Herzog presents it in his own inimitable style. That alone is worth the price of admission.