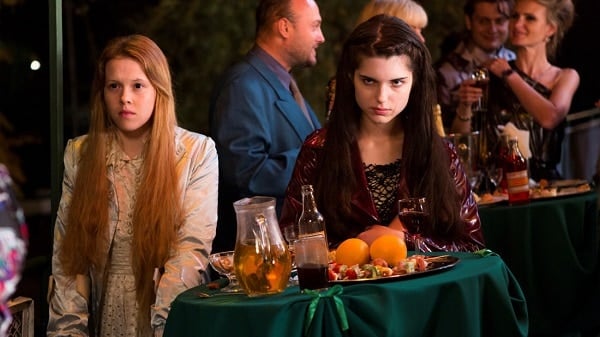 With its fever-dream urgency, pulsating soundtrack, and striking imagery, The Lure is like nothing you’ve seen before. Polish director Agnieszka Smoczynska packs her demonic creation with enough energy and originality to overwhelm even the most adventurous cinephiles. The Lure is a singular cinematic vision of perversity and beauty that demands to be seen.

We begin with two young mermaid sisters, Silver (Marta Mazurek) and Golden (Michalina Olszanska), seducing a group of Europop musicians into fetching them from the sea. They take the girls back to their tawdry adult nightclub and quickly enlist them as backup singers. The mermaids don’t seem to mind the constant barrage of outrageous characters, as they’re just killing time before they swim to America.

Their carefree plans are complicated, however, when Silver falls head-over-tail in love with the band’s bassist (Jakub Gierszal). Legend dictates that any mermaid who pledges her love to a human that ultimately rejects her shall turn into sea foam by the dawn. Presumably, deleting the human’s number from their phone isn’t adequate where mermaids come from. 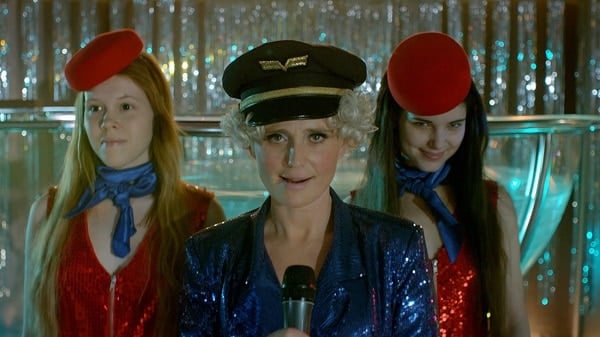 At the heart of The Lure is one of the most amazing soundtracks in recent memory. Zuzanna and Barbara Wronska compose songs that alternate between hypnotic ballads, hard-chugging rockers, and deliciously-trashy Europop dance tunes. Songs wrap around self-aware vignettes, informing and expanding their subtext. First-time director Agnieszka Smoczynska stages each number with a different tempo and color palette to add to its distinctiveness. Like the beguiling call of the siren, The Lure uses music to enthrall you. Only then does it ravish you with an onslaught of unforgettable imagery.

Bloody and unapologetically perverse, The Lure is unrelenting, if not unfathomable. There is a story here—mermaid meets boy—but nothing unfolds in a straight line. Smoczynska and her screenwriter, Robert Bolesto, never compromise tone or aesthetic for the sake of comprehension. Dreamy musical dirges blur the line between fantasy and reality, and huge production numbers worthy of a bloated Oscar telecast spontaneously erupt in crowded shopping centers. The internal logic of this bizarre world literally drowns your inhibitions and sweeps you along for the ride.

No film in recent memory so expertly mixes and transcends myriad genres. There is a propulsive musical with dynamic compositions, a creepy horror film with disturbing imagery, and a fairytale love story that never rings false. There is also family drama, coming-of-age naiveté, and plenty of titillating erotica. Thanks to Smoczynska’s assured vision, it all works. It’s a beautiful collision that leaves a thoroughly entertaining mess in its wake. 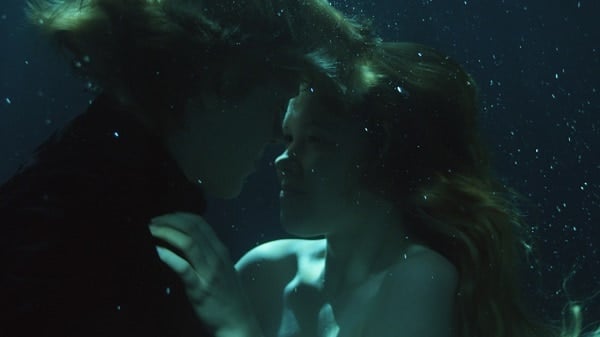 The cast is utterly committed to Smoczynska’s vision, as well. Mazurek and Olszanska spend a good deal of the production naked, but they never allow the prosthetics and slight-of-hand to overshadow their performances. Both are a peculiar mix of innocence and menace, like a carnival ride that might come unhitched at any moment. Each of the supporting cast is given distinctive personalities, from a demon-turned-punk rocker who prowls the stage in a murderous rage, to the creepily paternal nightclub owner, each actor manages to make their outlandish character both human and relatable.

The Lure deserves a home at midnight movie showcases everywhere. Its anarchic spirit is almost as infectious as its memorable tunes. There is beauty, ugliness, humor, and a whole heap of weird. Yet, it all makes sense in a world populated by libidinous rockers and bloodthirsty mermaids. The Lure is adventurous, boundary-pushing cinema that will inspire young filmmakers and enchant suggestible viewers. Find it and submit to its deadly charms!