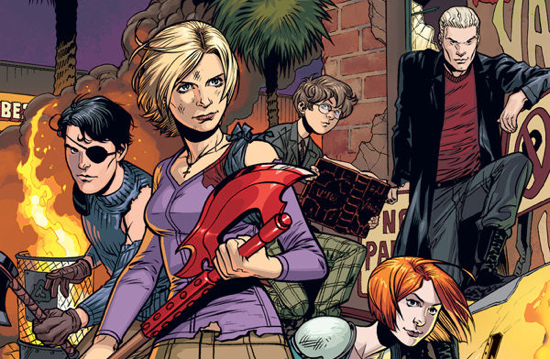 Buffy the Vampire Slayer Season Ten #7 shows that Spike and Xander together as roommates is both comedic and dramatic gold. Christos Gage and Nicholas Brendon land joke after joke starting with the first page where Spike asks Xander to move over his “dolls” so he can have room for his hundreds (possibly thousands) of Soap Digests. (Vampires watching soap operas makes weird, yet logical sense. You have to do something to pass the time while the sun is up, and not everyone can read Jean-Paul Sartre in the original French like Angel.) Artist Rebekah Isaacs adds some more humor with her spot-on reaction shots of the other characters’ faces to Spike and Xander’s odd couple antics. An issue of Spike and Xander trading banter would be an entertaining read in and of itself, but Gage and Brendon do what Buffy did and still does best by mixing its comedy with a heavy helping of interpersonal drama and a focus on character relationships. Beyond the hilarious banter, hijinks, and strange, yet fitting baddie, Spike and Xander have a lot in common.